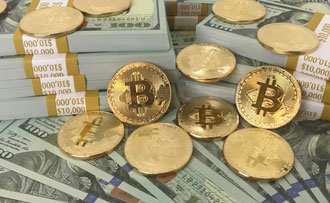 For most, it's hard to believe Bitcoin dropped $10,000 in 24 hours from Sunday into Monday.

But that's how this works.

Bitcoin's volatility is a feature, not a bug.

It's designed to transfer money from weak hands to strong ones.

The $10,000 drop makes for great headlines, but there is absolutely nothing abnormal about this 24% Bitcoin crash.

The reality is, this is a mild correction by Bitcoin standards and actually sets the world's first global decentralized cryptocurrency up for a more sustainable rise.

When you zoom in and compare what's happening now to PlanB's stock-to-flow model, you can see this correction is (and will be) miniscule in the grand scheme of things…

In fact, the recent Bitcoin pullback actually puts Bitcoin's price closer to the predicted stock-to-flow model price – which has continued to be 95% accurate in predicting the price of Bitcoin to date (within two standard deviations).

As far as I'm concerned, we're still well on our way to hitting those targets. Bitcoin's price isn't going to steadily increase at a couple hundred of dollars per day. It's going to ebb and flow, with fast and furious price spikes and drops until it is a $100 trillion asset.

When you compare what's happening now to what happened during the bull run of 2017, you will see that Bitcoin is actually more stable now than before.

That's right. Even though the total dollar amount of this drop from $42,000 to $32,000 is the largest we've seen over a two-day period, the percentage change is currently smaller than what we saw in 2017… 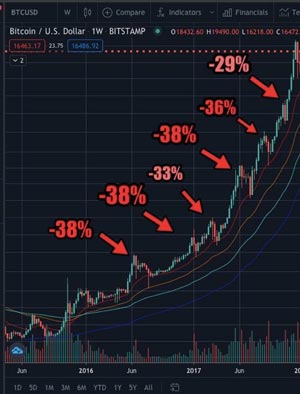 So far, during the current bull run, we have seen three Bitcoin crashes ranging from only 12% to 24%. 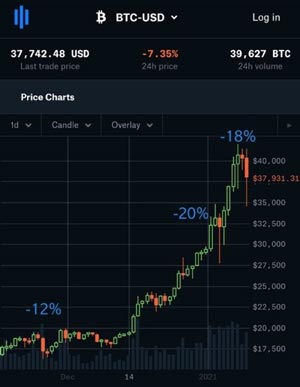 Now, could we see this current Bitcoin pullback last a while longer and go down more than 24%?

But the chances are lower now than before because retail investors were driving the last Bitcoin bull market and institutions are stepping in and buying this time around. 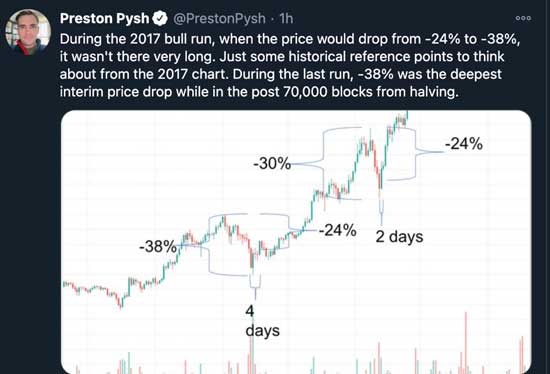 Based on what's happened following the two previous "Bitcoin halving" events – when the supply of new Bitcoin mined gets cut in half every 210,000 blocks (roughly four years) – this Bitcoin crash will likely only last a handful of days – maybe a week or two at most.

That's because the 70,000 blocks that follow a halving event clearly produce long bull runs that last about 16 months.

We are currently 35,600 blocks into this bull run after the last halving in May. So that leaves 34,400 blocks to go for this expected bull run.

Since Bitcoin blocks are generated roughly every 10 minutes, that means we have 239 days to go (with more expected bumps along the way).

Two hundred and thirty-nine days from now is Tuesday, Sept. 7 – which is exactly when the stock-to-flow model predicts $100,000 Bitcoin.

If history is any indicator, we could expect to see three more Bitcoin crashes along the way of this current bull market.

There could be more; there could be less. But one thing is certain: Every abrupt drop has always proven to be a great buying opportunity over the long run…

At the end of the day, if you can't handle the crazy volatility Bitcoin brings, then you need to manage your concern by taking a more appropriate position size.

We've already proven why it's financially irresponsible NOT to own Bitcoin.

All you need to do is add a 1% to 3% position in Bitcoin to not only increase your portfolio's returns, but also reduce your risk as well.

What to Do with This Current Bitcoin Crash

The likelihood Bitcoin reaches $100,000 by the summer of 2021 is extremely high in my humble opinion.

But the reason I think that is because I've spent thousands of hours studying everything I can about the world's first and only truly decentralized cryptocurrency.

Every day, I dissect the best Bitcoin bear cases in an attempt to find how and why it's going to fail. And every day, I fail at that task.

I think Bitcoin could reasonably go considerably higher than $100,000 this Bitcoin bull run…

That's just based on what we've seen Bitcoin do in the past. Here's exactly what's happened after the previous two Bitcoin halvings…

Action to Take: The longer your time horizon with Bitcoin, the more successful you will be with this emerging asset. With interest rates at all-time lows and expectations that they will go lower and even more negative in many parts of the world (including the United States), central banks have boxed themselves into a corner that they cannot get out of… without printing more fiat money. The more fiat they print, the less each individual unit of fiat is worth. And the scarce assets like land, real estate, art, gold, and Bitcoin will be worth more. Hold on to any Bitcoin you currently own and use any 20%+ pullback as a buying opportunity that will work itself out over the long term.

And if you've been paying attention, you know that Tom's right on the money.

Now, he's got another target in his sights – and he believes it's the BEST chance for everyday folks to make a fortune.

How do I buy Bitcoin?

That's a great question, thank you for reaching out!

To answer your question in detail, we actually have a free guide "How to Buy Bitcoin."