Investors welcomed the world's leading cryptocurrency exchange, Coinbase Global Inc. (NASDAQ: COIN), to the market on a high note last Wednesday; its market debut valued the company at nearly $86 billion. From the opening bell, buyers started jumping into the shares, driving the price to well over $400 a share and giving the same company a value of over $100 billion.

To put that into perspective, Goldman Sachs Group Inc. (NYSE: GS), one of the largest investment banks in the world, has a market cap of around $117 billion.

With that much cash behind it, Coinbase is so much more than a disruptor; out of the gate, it's an instant institution that's moved the timeline forward on the cryptocurrency market.

That's a given - what isn't so clear, at least from the folks I'm hearing from, are the investing implications for Bitcoin and the biggest Bitcoin stocks.

Because, at the moment, the short-term trend is... down.

I'll show you why that's happening, because I've got some charts that'll make clear just how big of a buying opportunity this is...

Bitcoin Is Taking Its Place Alongside Semiconductors and Crude Oil

I didn't start out as a "Bitcoin guy," but looking at the charts (and doing a weekly podcast with Microcurrency Trader Editor Tom Gentile, whose crypto research you can see here) has me convinced crypto has massive profit potential; Coinbase and Bitcoin have changed the big picture.

So why the heck are they all down from last week?

Not to worry. We've seen this before.

This is a classic sell-the-news event. These situations are often created when the expectations and buzz are flying high before events - just like Coinbase's rock-star listing.

The correlation between Bitcoin, Coinbase, and the big crypto miners is, for a virtual certainty, here to stay; Bitcoin is simply the "resource" that they produce. As market prices for that resource move higher, so does their revenue and value.

No doubt we've seen this relationship before - this is just the latest, modern iteration. Think about energy companies. Exxon Mobile Corp. (NYSE: XOM), Halliburton Co. (NYSE: HAL), and Chevron Corp. (NYSE: CVX) are all different producers, just like crypto miners. And just like crypto miners, these companies' prices are driven heavily by the price of crude oil. Once you're aware of that simple yet fundamental connection, you know you have to come back to the "resource" - Bitcoin in this case - as one of the leading drivers of share prices.

What we've seen here is short-term selling and now consolidation. Long term, Bitcoin and other cryptocurrencies have hit a sweet spot; they're innovating at exactly the time the mainstream is adopting them. I'm old enough to remember when the personal computer (PC) went mainstream back in the 1990s - that's the only thing I can remember that even compares.

Like Bitcoin, the PC market got off to a booming start that was marked with volatile peaks and troughs in the trading trends as the "trade" became more crowded with new competition and evolving technologies.

Pull Long- and Short-Term Profits from the Bitcoin Boom

Let's first look at Bitcoin - as a commodity or resource, just like crude oil or semiconductors.

Commodities are often more sensitive to technical analysis since the group of investors and traders watching them is so large. Let's take a look at the chart. 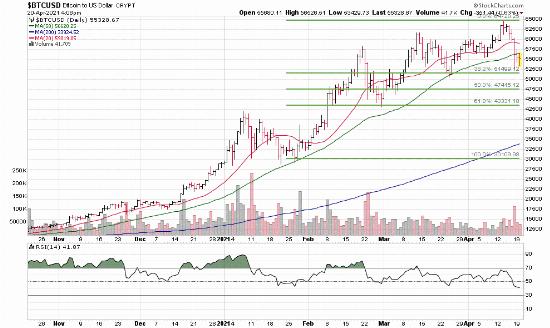 After its sudden pullback, Bitcoin is trading at "interesting" levels, to put it mildly. Three key technicals are likely to drive the next short-term rally in Bitcoin itself.

Round numbered support: It's deceptively simple, but round numbers matter to the market. The psychological impact of round numbers can be seen on many charts on a daily basis.

Today, there are two in play.

The $55,000 price has seen increased price and volume patterns each time it has come into play over the last two months. This level is also compounded by the fact that the $52,500 level has also attracted volume at its price level. Watch for both of these prices to form a short-term bottom as Bitcoin traders remain eager to participate in another short-term rally.

Finally, for the more technically driven traders, the 38.2% Fibonacci retracement level from the February lows to the recent highs rests at $51,500. Though watched by fewer traders, this more advanced "Fibo" technical analysis should also provide additional support nestled just below price and trend line support.

Should these levels not hold, the $47,500 price will be the next price target for heavy technical support.

But, like I've been saying, Bitcoin supports an array of businesses, some of which make terrific buys and even trades.

How to Play the Best Bitcoin Stocks Right Now

The Grayscale Bitcoin Trust (OTC: GBTC) is an irresistible way to augment those long-term Bitcoin profit goals. Contrary to what a lot of investors think, GBTC shares aren't an exchange-traded fund, though that is management's long-term goal. Grayscale listed as a private placement investment in 2013, just a year behind Coinbase. It was a way for "accredited investors" (read: really rich folks) to invest in Bitcoin. The company later listed for public trading and has become an easy way for investors to buy and trade a Bitcoin proxy.

The technical patterns between GBTC and Bitcoin are highly correlated, though the recent drop has taken GBTC shares below their 50-day moving average. In addition, the shorter-term 20-day moving average for GBTC is beginning to form what I refer to as a "Lead Cross" as it crosses below the 50-day. 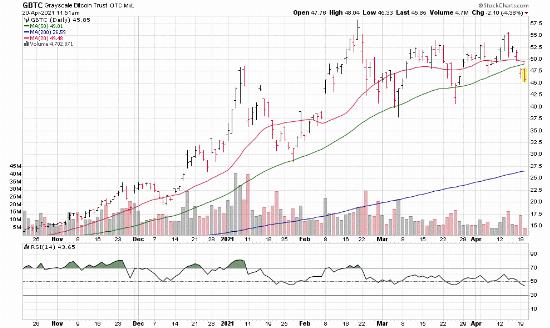 This pattern often precedes short-term volatility and lower prices, which puts GBTC shares in a different "buy now" class than Bitcoin itself. It also mirrors what we're seeing with the Fibonacci retracement levels from the Bitcoin chart above.

The bottom line here: You can expect lower volatility from GBTC... but at the cost of lower returns. This is similar to many ETFs on the market due to management fees and other expenses. That said, were GBTC to become an actual ETF, the resulting greater transparency would probably increase institutional and retail interest in the share - in plain English, that'd be a powerful profit catalyst.

And that brings us to Coinbase - a stock we don't need a chart for... because it's only been trading for five sessions at this point. From a technical perspective, the data's not there, and so there's nothing to say.

The way I see it, the highly anticipated direct listing offers a quandary for all investors: On one hand, this is probably the future of cryptocurrency. On the other, COIN shares are expensive by anyone's standards. How expensive is "expensive"? Well, it boasts a P/E ratio of 700 (no, that's not a typo: seven hundred), and the stock trades for more than 50 times last year's earnings.

Like so many other IPOs over the past few years, the valuations at opening bell on listing day are way higher than the market appreciates - or is willing to pay.

That said, I think the market is chopping it down to size right now. The market itself could be ready to post a healthy correction (that's a story for a different day), which makes COIN an "alpha stock" to watch from a distance right now.

Long term, it's a totally different story. So, I do want to buy Coinbase - just not here. My fondness for round numbers would kick in at $300, but there again, I'd wet my beak. Like any other new stock, I'm waiting for the real read on the data. When I get it, you'll be the first to know.

The market hasn't discovered Coinbase's real valuation yet. That won't last forever. There will be money to be made on Coinbase as crypto gets bigger and bigger in our everyday lives.

And, remember, we're not just talking about Bitcoin, but Ethereum, Litecoin - all kinds of cryptos. These are seeing incredible widespread adoption right now. That said, my colleague Michael Robinson believes serious profit potential could lie with some of the smaller "altcoins" - these are kind of "under the radar," often trading for about $10 - but they can sometimes experience big moves when coins like Bitcoin jump. You can learn a little more about what Michael's calling the "Digital Gold Rush" right here.