Governments have been cracking down on emissions for decades now - that's nothing new. But aside from fuel economy standards, they've left automakers more or less alone on that front.

Over the past year or so, however, regulators and legislators around the world have been focusing their attention on vehicles which, according to the World Resource Institute, produce between 20% and 25% of global CO2 and greenhouse emissions.

And that's a big deal because until now, regulation has always been the "missing puzzle piece" in getting the electric vehicle revolution off the ground.

In a way, it's not all that different from cryptocurrency or even cannabis; growth and profits have been good so far, but you know the serious boom will start once laws start to change.

And that's exactly what's happening in the EV space - a raft of proposed legislation and regulation is putting an expiration date on gas- and diesel-powered internal combustion engines.

That's going to be a monster profit catalyst for the stock of one of America's most overlooked, aggressively priced EV makers.

And right now, the market correction is handing us a beautifully discounted entry point...

The Beginning of the End for Internal Combustion Engines

Like I said, EV growth has been OK so far, more than tripling between 2016 and 2020. And it's tough to argue with the gains realized in stocks like Tesla Inc. (NASDAQ: TSLA).

But the real EV boom has yet to get going, simply because of the widespread availability and relative cheapness of the internal combustion engines we've had for more than 100 years now.

But the politics - and even more importantly, the economics - are changing fast.

We've had small hybrid vehicles like the Toyota Prius and relatively inexpensive, small EVs like the Nissan Leaf for a while now. But the Ford Motor Co.'s (NYSE: F) electric "Lightning" version of its market-crushing F-150 pickup is setting the stage for a big change. After tax credits, the Lightning F-150 truck will be cheaper than its massively popular gas-fueled stablemate.

And just last week, I shared some research with you that indicated internal combustion engines could very well be a money-loser for automakers by 2030.

There's no going back from here.

We've also seen a worldwide tsunami of new regulation and proposed regulation that would put EVs in a much stronger position in the market.

In the United States, aside from a commitment to move to an all-electric federal government fleet, there are no official plans for vehicle emissions limits, but pressure is growing. At the state level, though, several states are moving legislation forward to require an end to tailpipe emissions in the next few years.

If that's not the writing on the wall, I don't know what is. Car companies - way more sensitive to their bottom lines than politicians - can see it, and the savviest, most forward-thinking are making twin beelines toward EV development and new battery technology development. Some, like General Motors Co. (NYSE: GM), have moved to phase out ICE (internal combustion engine) vehicles on their own, no matter what happens in the regulatory sphere.

At the end of the day, ideology doesn't have much to do with it - it's a question of cold, hard, cash. There's simply more of it in electric vehicles from here on out.

Build Out Your EV Portfolio with This Company

Last week, I recommended my favorite international electric vehicle maker, NIO Inc. (NYSE: NIO), poised to dominate the Chinese EV market, which is growing even faster than the EV sector in the United States and Europe... for now.

But the American EV market - which is big already - is going to be absolutely massive within 20 years; I firmly believe that. The Energy Policy Solutions think tank projects as much as 75% of new light-duty vehicle sales will be electric by 2050, but I think that projection is a little conservative, because it didn't take into account the Biden Administration's pledge for an all-electric federal fleet.

My preferred way to play the U.S. EV market is Fisker Inc. (NYSE: FSR) - a "double play" on EVs and the battery tech that powers them.

Old-school EV investors will remember Fisker's previous incarnation, Fisker Automotive. Back in 2011, it produced the Fisker Karma luxury hybrid. The Karma was produced in very small numbers, less than 2,000 units, which retailed for between $102,000 and $116,000, so it never quite caught on.

But founder Henrik Fisker is a bona fide automotive genius who helped design the BMW Z8 and Aston Martin DB9 and V8 Vantage. When he took Fisker public via a special purpose acquisition company (SPAC), he was basically putting the world on notice that Fisker was back and here to stay.

Looking out through 2025, this company has an incredible pipeline. In fact, it might be easier to list what the company isn't working on in its pipeline. If it's got wheels and an electric motor, Fisker's probably developing it.

There are plans to market at least four consumer EVs by 2025 in everything from sedans to pickups to sports cars to SUVs. It's building 12-person autonomous electric shuttles that can be sold directly to municipal governments worldwide. And, in a blow to Tesla, Fisker announced it's manufacturing the first all-electric "Popemobile" - an SUV-based custom build for Pope Francis.

The stock was listed on the Russell 3000 Index just last month, and it's gone down around $5 a share since then. 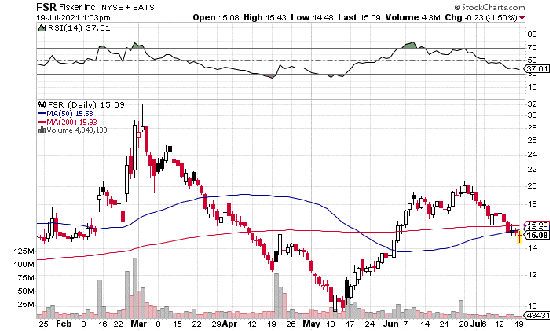 You can see here that FSR shares are trading below their 50- and 200-day moving averages, but the relative strength index (RSI) reading of $37 suggests the stock's heading into oversold territory. I really like this company at $15, and I like it even better at $10. As a long-term play, this is a stock you buy and hang on to until one day you realize you're sitting on 10 times your investment.

Fisker is a textbook example of the profit potential possible with SPACs, but believe it or not, it can be even better.

There are around 500 U.S. companies looking to go public right now, and some of them offer a “kicker” – a thing we like to call “pre-IPO rights.” In some cases, you can get dibs on ‘em for $1, but when and if these companies go public, those pre-IPO rights can potentially skyrocket. And I mean skyrocket… Peak gains of 2,088%, 6,566%, 8,280%, 9,075%, and even 27,500% have been realized in exceptional cases – truly massive profit potential. My friend and colleague, Shah Gilani, can show you some more about how they work right here.