If Nvidia were just a semiconductor manufacturer, the stock would be overpriced. Fortunately for investors, it is much more than a semiconductor company. That's why our Nvidia stock forecast shows shares nearly tripling from here. 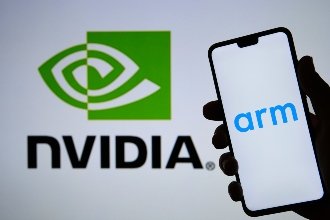 The thing is... Nvidia has an edge as it moves into cloud software and services.

Not only is Nvidia able to create powerful graphics processing units (GPUs) for the gaming and professional markets, as well as system on a chip (SoC) units for mobile computing and automotive market, but the company also pours a large amount of resources into research and development. This has allowed it to develop an expanding suite of cloud-based software.

Why Nvidia's Cloud-Based Software Will Dominate

If any good has come out of the pandemic, it's that we've seen the potential of cloud-based software and computing with the work-from-home movement. According to Gartner Inc., a tech research and advisory firm, spending on public cloud services is expected to grow 23.1% in 2021 to total $332.3 billion. That's up from $270 billion in 2020.

But cloud-based software is nothing without the data centers. Think of them as the brain of cloud services that keeps software and services running seamlessly. COVID-19 fast-tracked demand for data centers due to the increased adoption of cloud services. This pushed expectations for the global data center market to hit $117.82 billion by 2028 - a compound annual growth rate of 13.3% from 2021 to 2028.

And Nvidia's GPUs are at the heart of these data centers.

In the first quarter of 2021, Nvidia generated a record high data center revenue of $2.05 billion, up 79% year over year. That accounts for 36% of total sales for the company.

It's also worth noting that Nvidia is developing new cloud services of its own such as AI Enterprise and the Base Command Platform to go in direct competition with the tech giants, as well as Omniverse, a creative collaboration tool that leans on Nvidia's digital communication capabilities.

Artificial intelligence (AI) systems also require fast and reliable processors. To train and run AI systems, a process inspired by the way our brains function via a network of neurons called Deep Learning, they need to be top-notch.

And Nvidia's GPUs are unmatched.

But all the Nvidia-made GPUs are able to be purchased directly from the company and applied to hardware rather than just cloud infrastructure. Nvidia also offers its DGX series. These supercomputers are designed to give users powerful tools for AI exploration.

With all the growth in cloud software and AI, semiconductors felt the squeeze during the COVID-fueled demand spurred on by the work-from-home movement.

Why Nvidia Has a Trump Card in the Chip Shortage

Demand for high-end computing boomed so much that semiconductor production couldn't keep up with demand. While that demand was great for semiconductor companies, it also presented a problem.

Those tech giants turned into direct competition as they started to produce their own semiconductors for their products, like Apple's M1 processor.

Apple, along with Amazon and Google, all have licensed from ARM, a semiconductor and software design company. They hold an extensive portfolio of chip designs. While it takes a lot of capital to engineer circuitry in-house, these companies have enough spare cash flow for this route to actually make more sense than purchasing from, say, Nvidia.

But there's a catch... Nvidia is buying ARM.

Though Nvidia claims it wants to keep ARM independent, and though there are concerns over whether regulators will approve of the merger, this is still a huge move for Nvidia.

Should the merger go through, Nvidia will devote more research dollars to ARM and add expansive tech licensing to its portfolio, particularly to the AI department. This might not seem much like a win, especially since Nvidia isn't going to limit or deny access to ARM's portfolio of chip designs. But it is. It allows Nvidia to get a cut of the profit from the licensing.

If the merger doesn't go through, it won't set Nvidia back much at all. The company already announced new products that focus on the data center market and continues to push for research and development without access to ARM's portfolio.

In that regard, Nvidia is one of the top spenders in the game, spending one-quarter of its $19.3 billion revenue in sales on research and development over the year for software such as their game streaming platform, GeForce Now.

Either way you spin it, Nvidia is in a great position. The company is going after the expansive software world as tech continues to evolve and improve.

And it helps that Nvidia has a stronghold in an entirely different booming market: the gaming industry.

The Gaming Industry: A Boon for Nvidia

The size and scope of the gaming industry is massive.

Most recent data shows there are 3.1 billion gamers worldwide, which means that about 40% of the global population plays video games. Almost half of them are involved in mobile gaming - the fastest growing sector.

Out of that 3.1 billion though, 48% are PC gamers. That's about 1.5 billion people who either have their own personal gaming PC or access to one so they can game.

Meanwhile, only 8% are primarily console gamers.

Nvidia controls 81% of the discrete GPU market. Discrete simply means that the graphics card is separate from the processor for higher performance. Since Microsoft and Sony don't use Nvidia products for their consoles, most of Nvidia's discrete GPU sales come from the PC side of the market.

When it comes down to preference, a Steam Hardware and Software Survey shows that 75.4% of the gaming company's customers use Nvidia GPUs over AMD or Intel. Even though that's a select segment of that aforementioned 1.5 billion gamers, it gives you a good idea of the preferred company.

Nvidia has gone a step further by dedicating to the research and development of next generation GPUs to push the gaming industry forward.

It shows how serious the company is about the gaming industry. With good reason, too. All of Nvidia's efforts paid off when the company pulled in a record $2.76 billion from gaming revenue in the first quarter of 2021, up 106% year over year.

Out of all Nvidia's ventures, gaming chips represent 49% of the company's current revenue.

Although chip sales are a bulk of the company's revenue, there's one more thing - one more growth catalyst - that really sets Nvidia apart from other semiconductor companies.

As if Nvidia's success in the gaming industry or potential with cloud computing wasn't enough, the company has a number of other projects in the works that could drive Nvidia stock up. The most promising of the bunch is its work with autonomous vehicles.

Autonomous cars need to make decisions in a blink function. Only the best chips with lightning-quick processing can power these intense functions. Nvidia can more than provide this with its top-of-the-line GPUs. And it's yet another industry it's invested in with promising growth.

It's expected that 73% of all cars will possess some level of autonomy before fully autonomous vehicles even hit the market in 2025.

That number will continue to grow as technology improves because the technology behind these kinds of vehicles is still new and very complex.

They require consistent high-speed Internet connections to communicate and collect information about conditions, traffic, and obstacles to ensure that passengers arrive at their destinations safely. And 3D mapping provides the necessary level of detail autonomous vehicles require for successful navigation.

This is where Nvidia comes into play.

The company is collaborating with more than 370 companies in the automotive industry from top-tier car and truck manufacturers to HD mapping specialists on its Nvidia Drive system to push self-driving technology from concept to reality. Nvidia Drive is cutting-edge software that is continually improving and evolving through these collaborative efforts.

Autonomous driving only accounts for 4% of Nvidia's revenue. Once the market opens up to a wider customer base when fully autonomous vehicles are immune to cyber-attacks, self-driving technology could be the catalyst that sends Nvidia stock higher.

Our Nvidia Stock Forecast Shows It's a Long-Term Investment

Between cloud-based software, the gaming industry, and Nvidia's collaborative efforts with autonomous vehicles, the company has a number of outlets set to grow as technology evolves.

And that's what makes Nvidia stock shine. The company is involved with the forefront of technology and spends its money on research and development to remain there.

The company's strong financials are just a bonus. When you see where it's come from after knowing what it's working on, it's easy to understand how Nvidia stock can make a climb higher.

All of this is to say that Nvidia is going strong, has plenty of momentum for solid upwards movement, and is involved in a number of high-growth industries.

Can I invest in the stock if so what do I need to do an how much do I have to invest to start?

I'm no expert on brokerages, but Charles Schwab has no fees for investment, no minumum required, and allows you to buy fractional shares in $5 "slices," up to 30 slices at a time. You can also buy whole numbers of shares, as many as you can deposit the money for ahead of time with Schwab to let it clear.
Nvidia is selling for $166.30 right now, falling strongly after spiking to $326.76 in Nov. 2021. It was overpriced then and apparently underpriced now.
It's rated a buy by all the big analytical companies available from Schwab's research, it's rated a buy (24) or strong buy (12) by 36 of 44 analysts surveyed by Yahoo, who expect earnings/share to grow a consensus avg. of 31% per year for the next 5 years, very good for a stock with a P/E of 43. It's slowing down a little from an avg. 53% per year eps growth the last 5 years. I has twice as much cash as long term debt and more annual free cash flow than debt so it has no trouble handling it, with plenty of money for capital expenditures.
The latest, March 31, 2022, Argus research report says, "We believe that most technology investors should own NVDA in the age of deep learning, AI, and
GPU-driven applications acceleration."