Our nation loves an underdog.

It's in our collective DNA because it makes us feel good.

Social scientists have a few theories as to why, and they range from schadenfreude (the pleasure we experience when others experience misfortune), to a sense of fairness, to the sense of hope that emerges from unexpected success.

I think it comes down to people believing that there's a lot more to gain if there's an upset.

It doesn't matter whether we're talking about sports or money; people consistently play to their emotions.

The legendary American motorcycle maker is in deep trouble.

Shipments are the lowest they've been in years, and dealers can't sell through the stock on hand at the speed they need to keep things moving – pun absolutely intended.

Officially, the industry-wide story – at least as Harley tells it – is that the boomers are getting too old to ride, and the millennials just aren't interested.

I don't buy that.

Harley's primary competitor, Polaris Industries Inc. (NYSE: PII), is growing revenue 15.40% a year by offering a "family" of motorsport vehicles, ranging from all-terrain buggies to snowmobiles, and– yes – motorcycles. Many of which are offered at far lower price points and, dare I say it, far higher quality with far better engineering than Harley – including the highly successful, recently relaunched Indian brand.

He's embarked on a program to launch 100 new motorcycle models by 2027 – a project that will have Harley spending millions on marketing, new ridership programs, electric motorcycle development, and more. The company's adding dealership locations in China, India, Norway, Spain, and Thailand.

But what Harley really ought to be doing is what BRP and Polaris products are already doing: producing leaner, smaller, and less expensive bikes for urban, younger, and increasingly female riders. 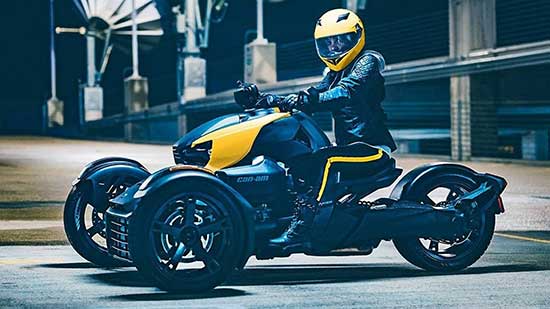 Why the Ryker Is Harley's Worst Nightmare

Good point except the Can Am "Spyder" is a product the Candian Bombardier group. Polaris produces the three wheeler "Slingshot".