Fed Chair Jerome Powell changed his tune last Wednesday morning, saying rates were much closer to "neutral" than they've been.

Not surprisingly, the markets shot higher, with the Dow tacking on 600+ points in its second best day of the year. All three averages gave some of that back immediately on Thursday, but no matter.

I've got to hand it to him.

Powell's language is a marked change from what he said in October, when he noted that rates were a "long way from neutral" and almost singlehandedly cratered U.S. markets.

CNBC's Jim Cramer very succinctly noted shortly after the announcement that Powell's "done the homework and he had to change his mind." Like me, Cramer has been harshly critical of the Fed, and for many of the same reasons.

Now let's see if Powell can resist meddling with the obvious.

Tariffs are still on the table, as are a whole host of other things that could gum up the works. Those include a global economic slowdown, politics, Brexit, a trade war… I could go on, but that wouldn't do anyone any good.

Markets can and do change on a dime. Anybody going along for the ride "because everybody else is" will get clobbered (again). And sheep, as the old saying goes, will get slaughtered.

Obviously, I don't ever want to see that happen to you.

In fact, the opposite is true.

My goal is for you to become a fabulously profitable investor, capable of building the wealth you deserve to live out life on your terms. And I started Total Wealth as a way to share the proven tips, tactics, and techniques that will help make that a reality.

Especially in circumstances like this, when everybody "knows" something to be true and bets accordingly.

This Microscopic Sphere Could Make You $1.4 Million Practically Overnight

Many investors were looking for an excuse to dump stocks coming into Wednesday's trading, and the headlines were filled with perspective on how to avoid the coming bear market.

I, on the other hand, was in rally mode.

In keeping with something the legendary Jim Rogers told me years ago, "It makes sense to start looking at the other side of the trade when 'everybody' knows something to be true."

I even went so far as to send out the following tweet Tuesday. 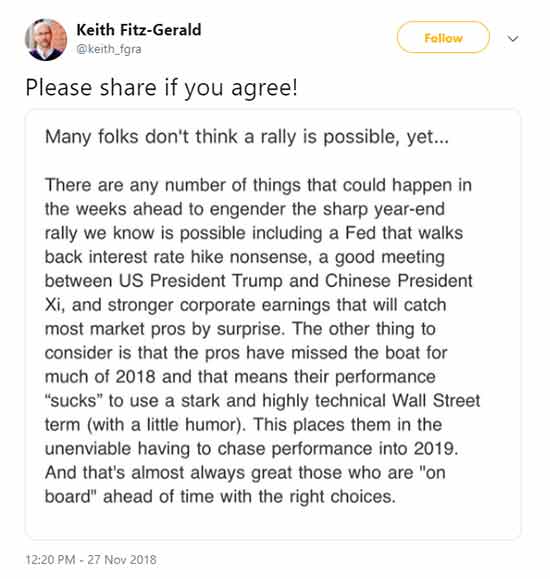 Honestly, I'm not any smarter than anybody else.

I simply knew that nobody wants to go down as being singlehandedly responsible for killing the longest-running bull market in history.

I totally underestimated the man.

He's the first Fed Chair I am aware of who's come even close to saying, "I was wrong" with regard to his prior assessment of rates and business conditions. I'm thinking about October specifically.

What he said Wednesday is not only a shift in what he's communicating, but how.

I can only wonder "who" got to him.