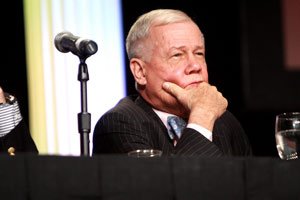 Renowned investor Jim Rogers went after the Fed in a June 9 interview with Business Insider's "The Bottom Line."

"[The Federal Reserve] has no clue what they're doing," said Rogers.

Indeed, the Fed has cut interest rates to near zero in hopes that low rates will spur consumer spending, a strategy we've long regarded as dangerous and feckless.

"Janet Yellen's Fed lost control several years ago, and they've been playing catch-up ever since," said Money Morning Chief Investment Strategist Keith Fitz-Gerald in December of last year. You see, Keith is a staunch critic of the Fed and, like Rogers, believes the central bank has outlived its shelf life...

Out with the Fed!

The Fed should be abolished and all members should resign, according to Rogers. "The world can get along without a central bank," he said.

Keith agrees - he has been calling for the end of the Fed since the financial crisis of 2008.

"The individual depositors - meaning you and me - who were the intended protected class when the Fed was formed in 1913, are nothing more than financial cannon fodder today. Now it's the big banks and crony capitalists in Washington who have become the protected few," said Keith in August 2016.

"[The Fed] is an insult to every investor who believes in capitalism, in economic progress, and political freedom," he added.

Why Keith Doesn't Trust the Fed

That said, Rogers and Keith differ in how they choose to react to the Fed. Rogers has taken the "duck-and-cover" approach, warning that the Fed's failure may lead the United States into a terrible downward spiral. "These guys are - they're setting us up for a horrible, horrible disaster," said Rogers. "It's going to be the worst in my lifetime."

Keith's advice: Don't panic. Be smart. And stay in the markets.

You see, every time the headlines get clogged with bad news, especially news about the Fed, you see massive sell-offs because investors are scared and uncertain. Just look at what happened after the Fed raised rates in December 2015 - the S&P 500 lost 7.3% over the course of just three weeks.

But what investors don't realize is that the markets have an overwhelmingly upward bias. "You should always stay in," said Keith. And the trick to making huge profits, especially in times of economic uncertainty, is to find "must-have" companies that fall into what Keith calls the six "Unstoppable Trends": medicine, technology, demographics, scarcity/allocation, energy, and defense.

"These trends are backed by trillions of dollars that Washington cannot derail, the Fed cannot meddle with, and Wall Street cannot hijack."

Keith said it best: "Invest accordingly, or get left far behind."

when the death comes to this market people will kill themselves in the streets of America. When that moment happens I hope the people that told them to do this are first in line. Death is really easy when you caused it , its your fault and your family knew it was your fault. You and your spouse need to take it and realize it was your fault. You are to blame and no one else. Your kids should also know that it was your fault. Forever. Enjoy your brief time of market highs,because this covfefe market is about to get really tight , bye bye