Today (May 22) Ford Motor Co. (NYSE: F) announced Jim Hackett – who has been on the company's board since 2013 – will replace Mark Fields as the new Ford CEO. 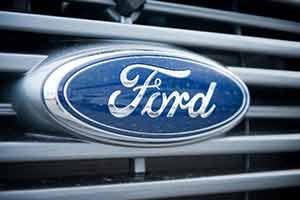 The market has embraced the management shake-up; Ford stock was up right away in early morning trading and remained up 1.79% in late afternoon.

Prior to his time at Ford, Jim Hackett built his reputation on transforming struggling office equipment company Steelcase Inc. (NYSE: SCS) into a once-again profitable enterprise.

When Steelcase started to go under in the early 90s, Hackett encouraged the company to embrace changes in the industry early on to get ahead of competitors. In fact, he was most well known for finding innovative solutions when no one else could.

"Jim has a way of looking at knotty problems from a very different angle and very different point of view," said a source close to Hackett to Grand Rapids Press in 2014. "He brought a lot of good ideas to the forefront."

Under Hackett's direction, Steelcase experienced major reform. Hackett had to cut the company's workforce dramatically and eliminate more than half of its facilities – a move that spooked investors. Steelcase's stock was down almost 51% for the year. But his decision ultimately saved the company.

"Without that painful move, the company could very easily have gone the way of other industry leaders, collapsing under its own weight," said Rob Kirkbride, editor-in-chief of Business of Furniture Magazine, to Michigan Live in 2014.

When Hackett took the reins at the end of 1994, Steelcase had reported a $70 million loss for the year.

When Hackett retired from the company in 2012, Steelcase made a profit of $56.7 million on sales of $2.75 billion, representing organic growth of 14%.

That comeback was driven by Hackett's vision to integrate technology into Steelcase's products.

Now he has the same opportunity with Ford…

Ford Is No Longer a Car Company 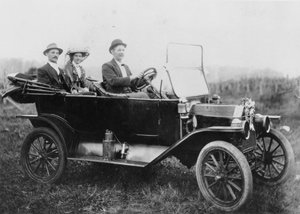 A Ford Model T Takes a Couple Off on Their Honeymoon, 1913

Ford is an American icon.

Throughout the 1900s, Ford made travel available to the common middle-class American, in no small part due to its innovative assembly line production, instead of the standard handcrafting.

Since then, Ford has sold over 350 million vehicles around the world, according to a 2012 report by Motor Trend.

But here's the thing: Ford is no longer a car company.

Yes, you read that right.

According to Money Morning Executive Editor Bill Patalon – who has long been following Ford and has a 1929 Model A to prove it – Ford is now a technology company.

That's why Hackett's innovative expertise is the perfect thing for Ford right now.

"He's a true visionary who brings a unique, human-centered leadership approach to our culture, products and services that will unlock the potential of our people and our business," Executive Chair Bill Ford said today (May 22) in a press release.

Hackett, along with Bill Ford, plans to focus on sharpening operational execution, modernizing Ford's business, and transforming the company to meet future challenges, according to the statement. And that is exactly what Hackett does best.

"This company is the most innovative in its field, and Jim Hackett will keep it an industry leader," said Bill back in December, when Hackett was assigned to Ford's Smart Mobility team. And Bill's long history following the company – which he highlights in the video below – puts him in the perfect position to spot its profit potential.

Watch below to find out why Bill thinks every investor should own this American classic right now.

"Stock Talks with Bill Patalon" is an ongoing video series from one of the world's best stock pickers that shows you how to grow your wealth with today's top companies. To view the complete series, click here.