The Democrats and Republicans have spent a record $3.5 billion in preparation for this year's midterm elections. But regardless of the outcome - whether you're a Democrat or Republican - the good news is that the stock market traditionally has performed well during midterm election cycles.

"The question is, 'Did the markets go up in the midterm election years by more than average in non-election years?' Brian Gendreau, market strategist for Financial Network told U.S. News & World Report. "And the answer is, 'Yes, by a huge amount more.'"

In the period from 1922 to 2006, the average gain of the Dow Jones Industrial Average over the 90 trading days following midterm elections (roughly November until mid-March) was 8.5%, according to a new study authored by Gendreau. That's almost 5% higher than the Dow's gains in non-election years.

During that period, the only time the ruling party gained seats in both the House of Representatives and Senate was in the 2002 elections, and the market fell afterward -making it the only time since 1942 that the Dow has fallen after a midterm election.

In the days before midterms, the market generally tends to perform well, just as it has this year.

"The market starts to go up beforehand and it just doesn't stop," said Gendreau.

While past performance is no indication of future success, consider this: The Standard & Poor's 500 Index has posted gains for every 200-trading day period following mid-term congressional elections since 1942. Stocks surge, on average, by a whopping 18.3% in those 200 days, according to the Leuthold Group, a Minneapolis-based investment-research firm.

Generally, the party of the president tends to do poorly in midterm elections. Since 1942, the party in control of the White House has lost an average of 28 seats in the House and four in the Senate.

In the 11 midterm elections between 1942 and 1982, control of one or both houses of Congress flipped just twice. But in more recent elections, a majority of Americans have expressed their unhappiness with the party in power. Voters have ousted the party in power in Congress four times in the past six elections.

Since the midterms tend to be an equalizing force on Capitol Hill, many experts have said that this proves the markets like gridlock in Congress. But the market has rallied no matter which political party prevails, even when the party in power loses control. 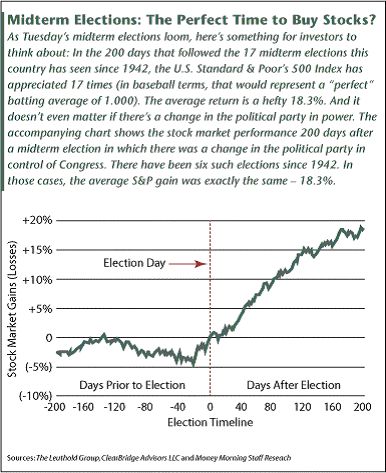 In the 200 days after a midterm election where political power changed hands, the S&P's average return was about equal to the return the index posted during the 17 midterm elections as a whole.

Some analysts say there's another explanation for all this market enthusiasm: The markets hate uncertainty.

"Changes in congressional majority power in midterm elections appear to have little to do with causing the strong performance of equities following the election," Leuthold's Eric Bjorgen told Kiplinger. "It doesn't matter if power shifts to the other party or not. It's knowing what's going to happen, knowing how policy will be formulated. It's a clearing up of the clouds of uncertainty."

If investors truly hate uncertainty, then what matters most would be getting the election over with. Since 1942, the S&P has tended to lag in the 200 days before mid-term elections. The average return for the 200-trading day periods prior to the mid-term election has been split between gains and losses (nine up - eight down), with an average 2.6% return. Starting in early October, however, stocks have tended to stabilize and then rise - just as they have this year.

Will the Pattern Hold Through 2011?

Goldman Sachs Group Inc. (NYSE: GS) has found that the S&P has averaged an 18.1% advance during the 12 months following each of the 15 midterm elections since 1950. And since 1945, the third year of a presidential election cycle has tended to be very positive for the markets. Indeed, the markets may get a boost from the "third-year effect."

Consider another intriguing statistic regarding midterm election years: In the five instances since 1942 when an incumbent first-term president was a Democrat, the S&P 500 has gained an average of 21.3% for the year.

Of course, there are other important factors weighing on the markets that might overwhelm historical trends.

Although the midterm election-rally effect appears to be on track this year, there are other pitfalls to consider. Markets often find a way to dash investors' preconceived hopes.

Expectations for big changes that might come from a Republican victory are overblown - especially on the issues that really matter to the stock market, Daniel Gross, the economics editor at Yahoo! Finance, told The Wall Street Journal. He finds it highly unlikely the Bush tax cuts will be extended, which could put a chill on any stock market rally.

"While there will be a significant shift in the political dynamic, those expecting instant rapid change in areas such as taxes and spending may be disappointed," he said.

Still, investors can find ways to protect and build their nest eggs, no matter how the elections go.

First and foremost among the three: Protect your holdings.

"No. 1, I think that investors need to be concerned about preserving their wealth," Fitz-Gerald told Fox Business viewers. "The dollar, overall, is getting weaker, and the federal government has made it clear with quantitative easing that it wants a weak dollar, that it wants to win the 'race to the bottom'. So things like gold and silver - and even things like rice, and wheat and corn - are all good choices right now."

How far will fed go to get economy rolling

We Want to Hear From You: What Stock Market Moves Will You Make After Midterm Elections?

[…] panic markets. Here's a look at what the markets are facing and where they may go. Historically, stocks rally strongly after midterm elections. Then again, historically, September and October are the worst months for stocks. Since markets […]