Although it's been one of the market's darlings for a decade now, dividend-oriented investors have long shunned computer giant Apple Inc. (Nasdaq: AAPL) because, well ... it didn't pay one.

That, coupled with AAPL's historically high share price, has always kept me from buying Apple stock - but, as a trader, it hasn't kept me from generating income with Apple options.

Last week, the cash-rich company finally took a step toward rewarding loyal shareholders by declaring a dividend - a quarterly payout of $2.65 a share, beginning with the fiscal fourth quarter, which runs from July 1 to Sept. 30, 2012.

Assuming the payouts continue, which they almost certainly will, that means Apple's annual dividend in fiscal 2013 will be $10.60 a share, which sounds fairly rich - except for one thing...

At its closing price of $599.34 last Thursday, Apple remains one of the market's highest-priced stocks, meaning the new annual dividend of $10.60 will equate to a yield of only 1.76%.

That's decent, but it's hardly near the top of the income-stock ranks. Plus, it'll be well over a year before you can collect the full dividend.

Fortunately, by using options, you can easily generate some significant income while waiting for Apple's new dividend to kick in - and multiply your yield at the same time.

How to Generate Income with Apple Options

The first inclination for most option investors wanting added income would be to buy Apple's stock and then write covered calls against it, as described in Money Morning back in January.

And while selling two nearby out-of-the-money calls - say, ones with a $610 strike price expiring on April 20 - would bring in $3,650 (they were priced at $18.25 last Thursday) to offset a bit of the cost, you'd still face substantial risk.

Should Apple drop to $584.25 - a distinct possibility given the stock's recent sharp advance and its high volatility - the income from selling the calls would be wiped out.

If Apple instead continued to move higher, also highly possible, your stock would be called away at any level above $610.

Given those scenarios, I prefer an alternate strategy for generating income from Apple - one that doesn't even require buying the stock.

It's called a short "option strangle."

Because it's so widely traded, currently has such a high share price and has made such a large advance over the past four months (up $238.93 since Nov. 25), Apple is ideally suited for this type of play.

It has an extremely wide range of available option strike prices, and the premiums on even the deep out-of-the-money calls and puts are extremely rich.

Annualized, that's a return of 112.59% - and, you can turn right around and do it again, selling a similar strangle positioned around Apple's share price in late April.

[Note: For an explanation of how margin requirements on options are calculated, you can refer to the Chicago Board Option Exchange (CBOE) Margin Calculator, which shows how the minimum margin is determined for a variety of popular option strategies.]

Of course, as the accompanying table illustrates, the trade is not without risk. 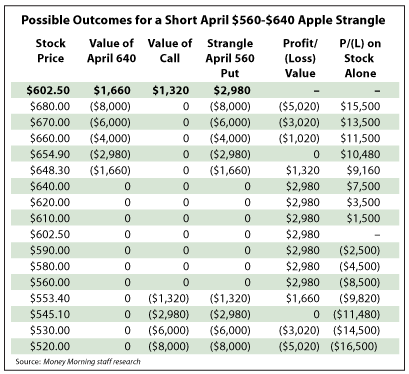 If you want a wider profit band, you can do a short strangle using more distant expiration months.

Personally, I prefer sticking to shorter-term options and repeating the trade after each expiration.

That way, you capture the most rapid erosion in the time value of the options you sell. Time is indeed money in the options markets - and, as a seller, you want to get as much cash as you can for selling as little time as possible.

Short strangles will work equally well with many lower-priced stocks, so long as they have enough volatility to offer decent option premiums over a range of six or eight strike prices.

They can also be used with widely traded options on various indexes such as the S&P 500 and the Nasdaq 100, or on exchange-traded funds tied to those indexes - e.g., the SPDR S&P 500 Index (NYSEArca: SPY) - working especially well whenever we're experiencing uncertain or choppy market conditions.

The point is you don't necessarily have to go hunting for dividend-paying shares to generate an income stream from the stock market.

Strategies like short strangles, covered calls and cash-secured puts can give you the same -- or, frequently, even better results.

There's a name for what you suggest: Gambling.

True, but don't bother reading about equity investment if you don't like gambling.

Looks like this trade would have been spot on :-)