Over the years I've written a number of articles about trading indicators.

They have ranged from the commonly used variety - like moving averages, crossovers, the VIX, death crosses, and Bollinger Bands - to the esoteric, including the tallest buildings, Big Money Polls, financial astrology and, more recently, magazine covers.

You'd think the tools market technicians typically use would generate the most interest. But inevitably, it's the more unusual indicators that people are most attracted to.

But I can tell you this - having spent tens of thousands of hours computer modeling almost every indicator you can conceive of, the most consistent and best performing indicators are almost always behaviorally-based.

What I mean by that is that there is inevitably an element of human behavior that is either: a) responsible for the indicator itself; or b) contributes significantly to how it functions and why it's relevant.

My grandmother, Mimi, a seasoned successful investor in her own right after being widowed at a young age, used to chalk this up to what she called the "complexity problem" - as in, if it's too complex for me to understand, it's a problem.

She didn't use the term like I do today in a non-linear sense. She simply reasoned that if something was too complex to explain to her, it wasn't worth her time or her money.

Skirt Chasing and the Stock Markets

And that brings me to women's skirts.

According to Mimi, the length of women's skirts reflects both societal conditions and economic potential.

When I questioned her wisdom on this one - as I did with many things she taught me about investing in those days - Mimi noted that the link between women's hem lengths and stock market conditions was established in 1926 by Wharton economist George Taylor.

Dr. John Casti, Cofounder of the X-Center in Vienna and author of Mood Matters: From Rising Skirt Lengths to the Collapse of World Powers puts it this way, observing "that the rise and fall of great civilizations are biased by the attitudes a society holds to the future."

As a leading proponent of the science of socionomics, Casti observes that when social mood is positive and optimistic, hemlines tend to be shorter. And, that the reverse is true when things are dour or the social mood is uncertain because they reflect the mass psychology.

So what are women's hemlines telling us now?

Formerly known as "Posh" Spice," a reference to her former life in the British girl band, the Spice Girls, she used to wear minis so small that they were rumored to cause heart palpitations during the go-go years of the 1990s. I can't say I disagree.

Lately, though, she's been wearing so-called "pencil" dresses with hems that run well below the knee. 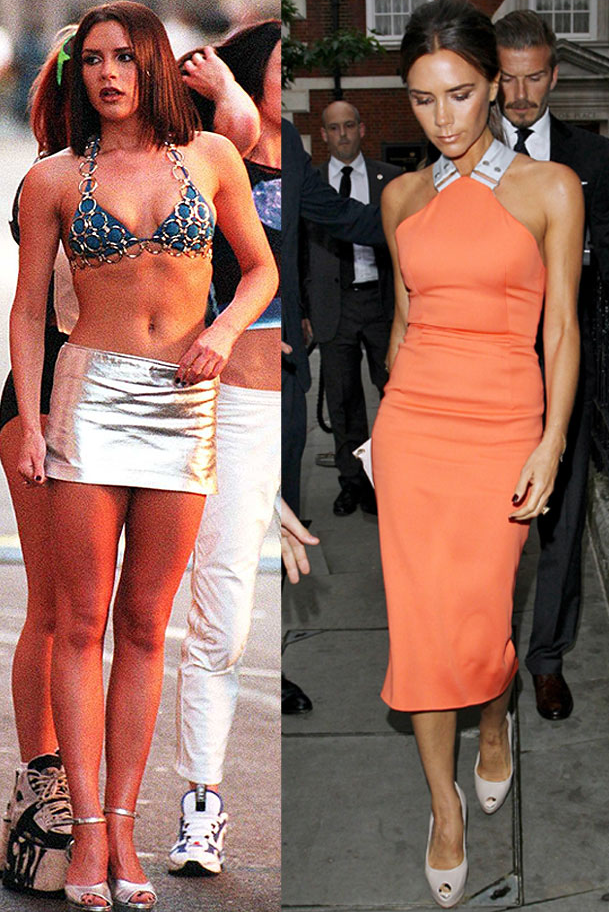 And she's not alone.

Entertainer Beyonce Knowles, model Miranda Kerr and actresses Hayden Panettiere and Eva Mendes are all rocking the look. Even Angelina Jolie is in on the longer hemline action.

I did some checking with fashionistas in London and New York and learned that this is not just in my imagination. At 33 inches, this year's hemlines are, on average, the longest they've been since the Great Depression.

This suggests some very conservative times ahead.

But how far ahead? That's a different question.

Two scientists from the Erasmus School of Economics, Drs. Marjolien van Baardwijk and Philip Hans Frances took a look at this phenomenon in 2010.

Using data from 1921 to 2009, they determined that hemlines didn't necessarily predict economic performance, but they did find that economics seemed to determine hemlines with about a 3-4 year delay.

At the time, Professors Baardwijk and Franses wrote that "the current economic crisis predicts ankle length skirts around 2011 and 2012" as observed by John Carney of CNBC.

So far we are right on schedule.

If the relationship holds, the emphasis implies we need to be cautious until approximately 2014.

Not coincidentally, that's when a number of other esoteric indicators, including various financial astrology calculations and wave cycle analytics, say we may finally turn the corner again.

My wife Noriko, who is a fashion plate in her own right, pointed out that the trend in shorts this summer is quite the opposite. Shorter is definitely better even if it means exposing some backside.

It's no wonder the markets are volatile.

By the way, Dr. Casti's newest book, X-Events: The Collapse of Everything is a fascinating read and I encourage you to pick it up if you're at all interested in socially-based market indicators like I am.

Sirs
Thanks for the interesting article about the connection between the skirt length and economical developments. While skirt length is always an intriguing subject, I have to disagree with the conclusion that it provides any economical/social mood indications. The fashion today (and I am just a happy viewer) allows women to show their curves and thus their sexuality, to the last detail, through the fabrics. Since the fashion industry needs to invent itself every day, it has to lead women choices and not be lead by them. So in reality the fashion industry determines what women like and not the other way around. ?

bilbow/ At age 77, i would have to be an absolute optimist about any effects from ANYTHING rising
along with the skirts….

Mrs. Beckham's dress at the Olympics was very short in the front and long in the back. That style of skirt or dress is in every store on the planet. I would say the indicator here is that nobody knows what the future is going to be. The front represents what we'd like to see. The rear indicates that we are covering our bums… just in case we were wrong about the front.

I have seen this skirt length hypothesis many times of late. Like sex and rock & roll, the new generations think they have invented it. It is not new. I first saw it during the 1970s. It might even be older than that.

Women make the fashions desiners and buyers follow. There is a section of women who change nothing until the stores do it for them, but thats always the way.

Maybe it has more to do with women aging and deciding not to show their bums anymore. I would think that skirts would be shorter in bad times in an effort to attract a benefactor. Longer would mean, more secure – not worried about snagging a lifeline. Things have changed so much, any correlation is likely gone. Women have largely foregone nylons for a a long time, women are also more likely to be self sufficient and if they are at work, they probably are dressing more modestly.