It's a little early for April Fools, but Ben Bernanke might just be a prankster at heart.

I say this because he recently told the Economic Club of Indiana in Indianapolis that the Fed's plans for QE3 would help create more economic activity and higher home prices. Then he added, almost as an afterthought, that this would help many more savers than it would hurt.

I was waiting for the punch line…or the laugh track…or maybe an old bada-boom from Paul Schaeffer's band offstage. Only it never came.

It's like he was making a bad joke, "but QE is good for savers. No, really! I swear…"

Why the Fed chief keeps linking housing prices to savings and, by implication, to an economic recovery defies logic.

No matter how hard he tries, he can't solve our nation's economic woes by making the same mistakes all over again.

Part of the reason housing blew up in the first place is that people began to view rising home prices as personal ATM machines. Now Bernanke is simply putting a new face on the same monster.

We already have a multi-year oversupply in homes on the market and ridiculous amounts of construction are still going on in parts of the country where there are quite literally no buyers. If you've been to Las Vegas or parts of Florida you know exactly what I'm talking about.

How many homes do we really need at a time when values remain 30%-50%, and in some places even 70% below their peak?

Certainly not the millions of new homes that Bernanke thinks we do while unemployment remains high and actual buying power has been dramatically reduced.

Now I know the media is very excited about recent data showing a recovery in housing prices, but let's take a deep breath. Seasonal demand accounts for a good portion of the bump. So does bargain hunting.

This suggests a new round of speculators has entered the game — and those folks are buying with cash, making mortgages irrelevant.

As a result, prices are being bid up even though overall demand remains relatively constant.

Then there are the banks. All of them claim they want to lend money, yet find every excuse not to. While they will claim otherwise, practically speaking they're saying one thing and doing another.

This, too, speaks to a massive disconnect.

Banks aren't worried that mortgage holders won't be able to make their payments. What they're actually concerned about is that the underlying assets against which they're lending will lose value.

I saw this first hand in Japan in the 1990s when banks realized that real estate can and frequently does lose value as economic conditions change.

Besides, if banks thought otherwise and truly believed in a brighter housing market ahead, those institutions would be falling all over themselves in the name of profits. For example, lenders would be doing anything they could to make it easier for borrowers to obtain loans, like reducing down payments and adjusting credit score requirements.

Instead they're busy profiting from spreads that are actually higher now than they were before the financial crisis.

How much more? Sit down…according to the Financial Times, the interest banks pay on mortgage bonds has dropped from 2.36% on September 12, the day before the Fed announced its new program, to as low as 1.65% last week. It edged up to 1.85% on Monday.

Further, also according to the Financial Times, the profit banks earn from creating new mortgages and selling them into secondary markets has risen to 1.6%. That's up from the 1.44% they pocketed before QE3 and significantly higher than the 0.5% they earned on average in the decade between 2000 and 2010.

The banks would also be securitizing an entirely new batch of garbage mortgages to sell into global markets almost before the ink is dry. But they're not. And the Fed, not private buyers, remains the purchaser of last resort for mortgage-backed securities as QE3 continues.

It's no wonder that "bank" has become a four-letter word lately.

Where the Fed Gets it Wrong

Which brings me back to Ben Bernanke…what can he possibly be thinking?

I believe he is trapped in history and it's affecting his judgment.

At the end of WWII, our nation made the conscious decision to rebuild based on three things: cheap energy, cheap transportation and cheap housing.

So Washington created industries to support all three, but especially housing.

Our government built in mortgage deductibility and capital gains treatment for appreciation. We created the S&L industry to finance residential borrowing and enacted special rules that gave S&Ls the ability to lend lower while offering higher returns to their investors than traditional banks. Few people remember this, but at one time S&Ls – thrifts as they were called – could lend only within 50 miles of their home office.

Then, our leaders got greedy. They poured jet fuel on the fire in the 1970s and 1980s then again in the early 2000s by making gobs of debt available to compensate for shoddy market conditions and economic headwinds. Not surprisingly, real estate markets exploded.

Then along came the Housing and Community Development Act of 1992, which amended the Fannie and Freddie charters. It mandated that both institutions meet affordable housing goals set by the Department of Housing and Urban Development (HUD).

Initially, the goal was for 30% of the combined portfolio to be comprised of low- and moderate-income mortgage purchases. By 2007, that figure had risen to 55%.

Somewhere along the line, the psychology of housing changed. I believe the hundreds of billions of securitized mortgages that were created out of thin air allowed people to view housing as an investment with fixed-income characteristics regardless of the underlying quality of the mortgages or the banks underwriting them.

In other words, houses stopped being simply homes and became the physical equivalent of fixed income instruments…investments by any other name.

If you buy into this – and I think Bernanke does – my theory makes sense.

The problem is eventually the prices of the assets being purchased rise to levels that result in a negative yield to maturity. This means that buyers paying the inflated prices will lose money as maturity approaches because fixed-income yields rise at the same time.

Yet, the Fed buys anyway and so do many institutions. They do so because they are concerned with matching their liabilities so the losses they incur along the way are acceptable.

Individuals obviously don't have this luxury. They don't care about matching liabilities like the Fed does. Rather, they care about not having liabilities in the first place, especially when they are tied to assets that could decline over time, like their houses.

But don't houses always rise in price over time?

I know that's the conventionally held wisdom, which is why Bernanke may believe it, but the data suggests otherwise.

Low interest rates don't translate into higher housing prices. If anything, they move in reverse.

The Economist highlighted this dramatically in an article last April noting that while real interest rates have plunged to their lowest levels in the last quarter century, "this hasn't helped the housing market at all."

In fact, noted the article's author, Buttonwood, if you divide the last 24 years of U.S. housing price data into thirds, average housing gains were 32% higher when rates were higher and rising than when they were lower and falling. 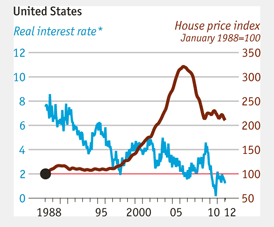 Naturally, there are those who dismiss this data, suggesting it somehow doesn't reflect the bigger picture.

They're right — it doesn't. The bigger picture is even more damning.

Over time, housing prices barely keep pace with inflation and even then for shorter periods only. This means they are not a proxy for personal savings, nor can they possibly contribute to long-term economic stability or even short-term growth.

What the Case-Shiller Index Really Says About Housing

You can see that very clearly in the Case-Shiller Index created by Yale economist Robert Shiller.

Dating all the way back to 1890, the Case-Shiller Index reflects the sale prices of existing houses rather than those of new construction so as to more cleanly track housing values as investments over time.

Worse, the data also suggests that prices have yet to fully revert to their average, which is 112.9263, versus the most recent index reading of 119.9263.

Put another way, existing home values have to fall another 6% before our nation comes into line with historical averages. 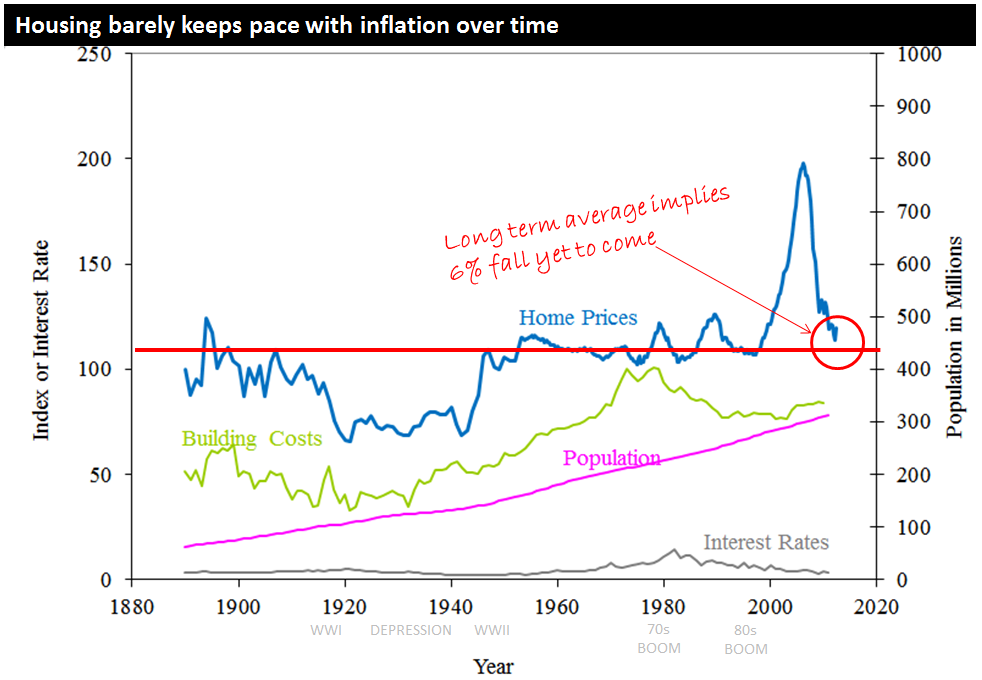 The other thing that's apparent if you look at Shiller's data is that housing prices return to their mean over time irrespective of changes in both building costs and population – both of which are frequently cited as key real estate investment drivers.

No doubt I am going to catch lots of flak for this from real estate professionals. I hear you guys…but hear me. I am not saying real estate is always a bad investment.

In fact, real estate can become significantly more valuable when its use changes and its economic density increases. For example, single family homes are more economically dense than wheat fields. High rises have a higher economic density than single homes. And so on.

What Ben Bernanke doesn't understand, or hasn't factored into his thinking, is that there is room for only so much economically dense property in this country.

Zero interest rates or not, if you strip out the debt that allows developers to construct projects that otherwise wouldn't exist, the cash on cash return for housing is about what inflation offers over time.

Ergo, real estate is not the building block the Fed's badly busted economic models think it is–at least not these days any way.