Republican control of the U.S. Senate has made approval of the Keystone pipeline imminent.

TransCanada Corp. (NYSE: TRP), the company building the Keystone XL pipeline, would be the greatest beneficiary of its approval, of course. But dozens of other companies also figure to gain from the project.

With the Democrats soon to be the minority party in the Senate, Majority Leader Harry Reid, D-Nev., will lose his power to block voting on Keystone XL pipeline bills, as he has done for years.

No More Obama Wiggle Room on the Keystone XL Pipeline

As for President Obama, the clock has just about run out on his stalling tactics. When asked by reporters about the Keystone XL pipeline yesterday (Wednesday), the president stuck to the neutral position he's held all along.

"On Keystone, there's an independent process. It's moving forward. And I'm going to let that process play out," President Obama said. He was referring to a pending Nebraska Supreme Court case. The court is to rule on whether the state's governor had the authority to approve a Keystone route change in 2012. 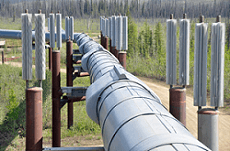 But when the Keystone pipeline bill lands on his desk next year, President Obama will have to either sign it or veto it. Both options put him in political hot water.

Signing the bill will enrage the environmental wing of the Democratic Party. But a veto would anger a much larger group of people.

The Keystone pipeline has significant Democratic support in Congress, making this a bipartisan issue. A non-binding Senate vote on the Keystone bill taken earlier this year won 11 Democratic votes.

But what will really give President Obama pause is public opinion. A Pew Research Center poll taken in the spring showed that 61% of Americans favor building the Keystone XL pipeline. And that includes almost half of all Democrats (49%).

"I actually think the president will sign the bill on the Keystone pipeline because I think the pressure - he's going to be boxed in on that, and I think it's going to happen," Republican National Committee Chairman Reince Priebus said on MSNBC.

When the Keystone pipeline bill is approved early next year, it will boost at least a dozen energy stocks...

The Winning Stocks of the Keystone Pipeline

It's easy to see why oil and gas companies from Canada to the Gulf Coast are eager to see the Keystone XL pipeline built.

It's a massive project.

TransCanada says the pipeline will have a capacity of 830,000 barrels a day over its 1,179 mile length.

Many of these stocks have been slammed lately as oil prices have dropped. But that's just made them cheaper.

The stocks that will benefit from a completed Keystone pipeline fall into several categories:

the winners of the keystone pipeline, how does kinder morgan fit in? your opinioun please.

Kinder Morgan is trying to triple the capacity of its Trans Mountain pipeline to Vancouver, which competes directly with the Keystone XL pipeline for the Alberta oil. So approval of Keystone would be a negative for Kinder Morgan. But if both projects happen, the biggest winners are the producers in Canada. They'll have more options to transport their product.

No competition here Kmp goes to the West coast at Vancouver and the Keystone goes to the Atlantic along the Texas coast as far as shipping goes it's just a little over a million barrels a day combined, Canada currently supplies 3 million a day to the USA! Be very careful of the energy independence claims!

do you think this positively or negatively effects Baytex Energy once the deal is final? (BTE)

As one of Canada's oil producers in Alberta, Baytex clearly would benefit from completion of the Keystone pipeline… as well as the proposed expansion of the Kinder Morgan pipeline.

how about some Canada Small Jr. companies Blackbird, Delphi, Rock, Kelt, they must benefit.

how about some Canadian Small Jr. companies Blackbird, Delphi, Rock, Kelt, they must benefit as well