The price of oil has slipped consistently since June, dragging most oil stocks down with it. 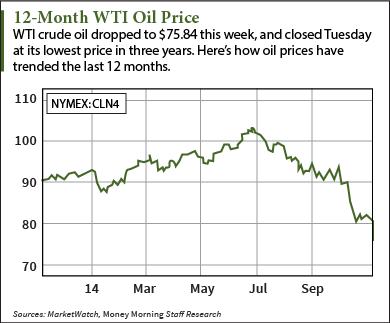 Brent crude prices are falling as well. The global benchmark dipped near $82 per barrel Tuesday - its lowest level in four years.

There are several reasons oil prices are down:

Crude oil prices will remain low as long as the United States and Saudi Arabia maintain their current production levels.

This week, Goldman Sachs (NYSE: GS) released one of the most bearish estimates for crude prices in 2015. They expect WTI at $75 per barrel and Brent at $80 in Q1.

That drop in the price of oil has crushed some oil stocks more than others. While certain parts of the industry will continue to struggle, others present great opportunities for investors right now.

Here's a look at how these different oil stocks will be affected...

Some of the biggest losers from dropping oil prices are major oil frackers.

Money Morning's Global Energy Strategist Dr. Kent Moors, who has more than 35 years of experience in oil and gas policy, explained it like this:

"The projects that are now falling off are the unconventional (shale and tight oil), deep horizontally drilled, fracked wells that are more expensive to develop. And while these projects have the potential to produce large volumes, they cost millions to complete.

"Projects like these make perfect sense when oil prices are above $100 a barrel," continued Moors. "At those levels, economies of scale take over and improve profit margins. The higher production volumes offset the higher operating costs."

Take a look at the recent performances of these major fracking companies. Since June 26, Pioneer Natural Resources (NYSE: PXD), which operates in Texas' Eagle Ford Shale, has dropped 26%.

PXD isn't alone. Continental Resources Inc. (NYSE: CLR) is down 32% since late August. Whiting Petroleum Corp. (NYSE: WLL) may be the biggest loser of all - down 37% since the beginning of September.

For an industry snapshot, take a look at the Market Vectors Unconventional Oil and Gas ETF (NYSE: FRAK). The ETF has 66 stock holdings, many of which are fracking companies. Since late June, it's down almost 25%.

While fracking stocks should be avoided right now, the following oil stocks have presented incredible entry points for investors...