Gold Price Forecast 2015: The gold price looks like it will end 2014 down, rounding out three years of weakness for the metal. That makes the outlook for gold in 2015 even more anticipated than previous years…

The biggest questions around gold's direction in 2015 include: Is gold finally done consolidating? When will it regain its bullish trend? Is gold a good buy today?

Let's take a look at all the factors to consider…

How the U.S. Dollar Will Affect Gold Prices in 2015 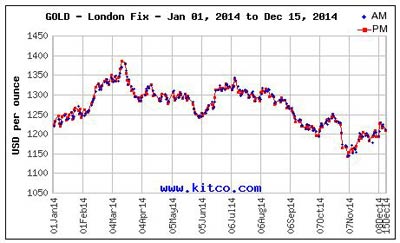 One of the biggest headwinds for gold prices this year has been the U.S. dollar. So far this year, the U.S. Dollar Index is up from 80 at the beginning of July to about 88.5 right now. That's a 10.6% move in just five months – huge for any currency.

Now the U.S. dollar is at a level not reached since July 2009, in the immediate aftermath of the financial crisis. 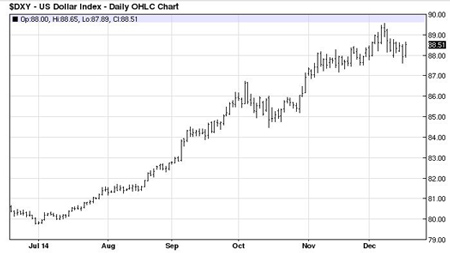 A stronger dollar means fewer of them are needed to buy the same quantity of gold. The gold price can still rise simultaneously with the dollar, but it's more difficult.

We could see the U.S. dollar continue to strengthen into 2015. The most influential central banks across the globe are aggressively printing money and either keeping interest rates low or actively lowering them. Japan, Europe, and China are all battling to weaken their currencies.

Overall, though, I don't expect the dollar to continue to weigh too much on gold's advance, because central banks will be desperate to get inflation going. And at some point the dollar's rise will be problematic, so expect the U.S. Federal Reserve and U.S. Treasury to start "talking down" the dollar before too long, which should help the gold price.

Another big support for gold is demand, especially from Asia.

And then there's the wild card:

CENTRAL BANK TALK AND NO DO

About all the FED can do anymore, or central bankers as a group, is talk. "The Fed can talk down the U.S. Dollar", right? Ha, Ha, Ha. Markets decide exchange rates. In fact, the U.S. Dollar Index was not even on the FED's "Dashboard" when Ben Bernanke was chair. So much for that notion. Now the next example: The European Central Bank and its current Chair, Mario Dragi. Mario says each time about future European QE: " He will do whatever it takes". Only problem is he keeps saying the same thing ( "Crying Wolf" ) but no massive asset purchases to stimulate inflation. Its a no go.

Welcome to the new "Wild West" in global markets and the volatility that will come with in on occasion when the next shoot-out or crisis erupts ( New Arab Spring).

Gold is real money. It has been used as money for 5,000 years, and will continue to be used as a means of exchange for the foreseeable future, when the dollar, the euro, the British pound and other fiat currencies have found their intrinsic value – zero.

Yeah, keep saying this nonsense for a few more years. Better yet, buy gold and silver, don't keep any dollars. We will see, who lasts longer, your brain-dead lifestyle or the reserve currency of the world. I am absolutely certain that you rely on the dollar 100% each and every day of both your personal and business life. Unbelievable to what lengths some of you stupid fools go just to sell their crap (for dollars might I add).