Last week, while wishing my newsletter subscribers at Capital Wave Forecast and Short-Side Fortunes a happy New Year, I warned them that 2015 isn't going to be a happy-go-lucky year.

The one prediction I emphasized over and over was that market volatility would be extreme.

We already saw that yesterday with the Dow Jones Industrial Average down 331 points and oil (based on West Texas Intermediate pricing) dipping below $50 for the first time since April 2009. 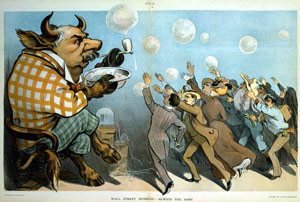 There are many reasons why volatility will be our constant companion in 2015. And there will be many opportunities to profitably trade volatility – both on the way down and on the way up.

So today, I'm going to start showing you how to profit from volatility across all the asset classes that are going to make or break investors in 2015.

Market Volatility and the Problem with Manipulation

Extreme volatility is the inescapable by-product of manipulation of free markets. After years of central bank manipulation of interest rates and price discovery, the free-market pricing of assets becomes grossly distorted.

The root of the problem with central bank manipulation is that capital allocation itself becomes distorted as speculators chase assets that central bank policies benefit. And when the world's biggest and most powerful central bank, the U.S. Federal Reserve, openly articulates a policy to lift equity prices in order to make households "feel" more wealthy watching stocks make new highs, you know the fix is in and manipulation itself is a policy prescription.

Central banks have very limited tools. The blunt instruments by which they manipulate interest rates don't have any effect on markets, regardless of asset classes, once markets take it upon themselves to do whatever they do.

In other words, central banks have no way of stopping market panics, corrections, or outright collapses.

If you don't believe that, allow me to offer you some proof….