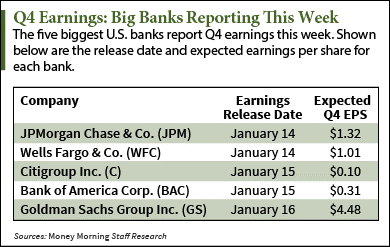 Profit forecasts for the finance sector have fallen overall since Q4's start. At present, analysts project a 1.7% slump in sector earnings for the October-December period. That's well below the 8% growth rate forecast at the end of September, says FactSet.

Five possible factors are behind this slump. Here's a look at what will weigh on Q4 bank earnings.

No. 1. Oil Prices: Plunging oil prices have put a damper on one of banks' most lucrative segments since the recession. With interest rates near zero for six years, U.S. banks have lent often to the nation's energy sector. In fact, robust activity from energy firms offset the slack from consumers and other companies reluctant to borrow. But crude prices are down some 60% since June. That's below levels needed for some energy companies to service their massive debts. This has slowed borrowing and lending but increased default risks. The energy banking boom is over, at least for now.

No. 2. The U.S. Dollar: The strong U.S. dollar is another potential headwind for bank earnings. A strong dollar hurts U.S. exporters. With more than 70% of the world's purchasing power located outside the United States, many American companies have become exporters in hopes of tapping that lucrative market. A stronger dollar likely forced many U.S. bank customers to pull back business expansions. Plus, many banks are also exposed to higher loan losses when overseas business is lost. Finally, a strong dollar puts pressure on the U.S. Federal Reserve to keep interest rates low. That pressures banks' net interest margins – the difference between what banks can charge on loans and earn on other investments.