If we had to describe all of the amazing new products and technologies we saw at the Consumer Electronics Show (CES) 2015 last week, we'd need 10 of these columns.
Amid all the hype this year, the hugest buzz was about ultra-high-definition TV (UHDTV). 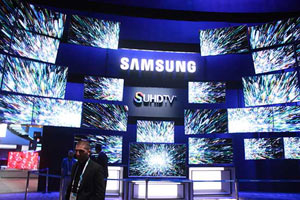 It was all about ultra-high-definition television (UHDTV) at CES 2015. Samsung's 28,000-square-foot pavilion was the largest in Las Vegas this year.

The focus on televisions isn't surprising for a consumer electronics-focused trade show filled with buyers from major online and big-box retailers. But there's also a reason for tech investors like you folks to pay attention as well.
According to the Consumer Electronics Association trade group, Americans will be buying 1.43 million UHDTV sets, or roughly 5% of televisions sold nationally, in 2016. That's a 60-fold increase from 2013, when UHDTVs debuted.
And, of course, there are ways for all of us to profit on all those UHDTVs our fellow Americans will be buying.

At the LG Electronics Inc. pavilion, we witnessed some of the most lifelike images we've ever seen on these new 4K UHDTV displays, as well as on the new organic light-emitting diode (OLED) TVs. These sets had amazingly brilliant and bright colors as well.
Samsung Electronics Co. Ltd. (OTCMKTS: SSNLF) is also stepping up in a big way with UHDTV. At the South Korean company's 28,000-square-foot pavilion – the largest one at CES this year – we were treated to more amazing views. 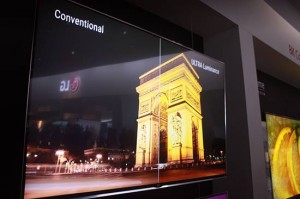 The UHDTVs from LG Electronics at CES 2015 had the brightest and most brilliant colors I've ever seen on a TV set.

Not to be outdone (except in size), the 25,000-square-foot pavilion for Sony Corp. (NYSE ADR: SNE) boasted (among many other fantastic products) a 4K set the Japanese company calls "The World's First High-Resolution Audio Compatible TV."

The rule-of-thumb definition of "high-resolution audio" is any audio quality better than a CD. If you're an audiophile, like us, you may want to mark down this model number 65X930C – it was that good.

And the way we're cashing in on all these incredible new TV sets is through longtime Strategic Tech Investor favorite Ambarella Inc. (Nasdaq: AMBA), whose video processors are found in most UHDTVs. If you've stuck with Ambarella – also a video chip supplier to CES favorite GoPro Inc. (Nasdaq: GPRO) – since I first recommended it back on Aug. 2, 2013, you've made gains of an incredible 259%.

And I think it could still double from where we are now.

That's why we're on the hunt at CES for our next triple-digit winners.