Oil prices are surging for one reason, and this picture says it all: 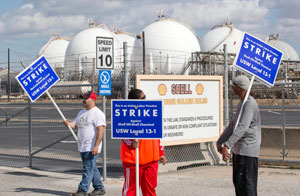 You see, Tuesday's oil price rise comes on the third day of the biggest national oil workers' strike since 1980.

The strike threatens to disrupt as much as 64% of total U.S. fuel output.

"The problem is that oil companies are too greedy to make a positive change in the workplace," USW international vice president of administration Tom Conway said to TIME. "They continue to value production and profit over health and safety, workers, and the community."

You Might Be Losing Money Every Day… Every investor is hard-wired to do three things that kill returns. Do you know how to avoid them? Find out what they are, plus the single-best investment strategy for maximum gains, in our free guide: Make 2015 Your Wealthiest Year Yet…

Shell has said it would like to continue talks.

"We remain committed to resolving our differences with USW at the negotiating table and hope to resume negotiations as early as possible," Shell said to Reuters.

In the meantime, oil companies have said they would call for replacement workers. That way, the strikes would not to cause a spike in gas prices.

But according to Bloomberg, more refineries may join in the protest.

For an in-depth look at the USW strike and its effect on oil prices in 2015, go here…

Huh!? Maybe I don't remember my economics 101 – but if oil refineries can't operate due to a strike they would refine less oil, causing a drop in oil demand…and you're saying this causes a spike in oil prices!? A strike at a refinery would result in a drop in oil demand, therefore it would have the effect of depressing oil prices. Do you know anything about economics? The reason the oil price is up is most likely a combination ISIS threatening Kirkuk, US Oil rig count down and probably a short squeeze all happening simultaneously, combined with some irrational… Read more »