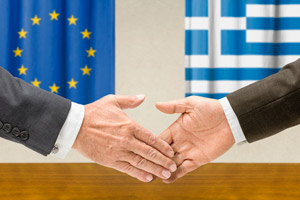 Stock market today, Feb. 23, 2015: Good morning! U.S. stock futures  were soft Monday morning. However, major European markets jumped in early trading, and Germany's DAX hit a new record high. They are still gaining from Friday's news of a conditional deal that will allow Greece to remain in the Eurozone for at least the next four months. The deal sent U.S. markets up Friday - the Dow saw a 154-point rise, and S&P 500 Index notched a new record high.

Today, investors will continue to keep a close eye on the ongoing drama between Greece and its creditors in the European Union. Greece must present a list of economic reforms by the end of the day for the deal to continue.

Money Morning Tip of the Day: You can make any investment virtually risk-free under the right circumstances by using a strategy called the "free trade."

Markets are now at new record highs. Many investors are sitting on solid profits and, in doing so, taking on a lot more risk than they should.

So now is a perfect time to discuss one of my favorite tactics: the free trade.

This strategy lets you do three things at once:

It's simple. Here's how it works:

Once an investment delivers at least 100% returns, sell half your position to capture profits. Then redeploy those profits into other investments, and let the remaining shares of the first investment run.

So you get back your original investment, and you maintain all the upside you can handle, essentially "for free." Even better, since you've now "paid" for your investment, you can stay in the game with not another dollar at risk, even if the stock you've just harvested has a reversal in fortune and goes from hero to zero.

A free trade works in all market conditions, on any investment, and can be set up well in advance. No other technique I know of comes close in terms of simplicity or effectiveness.

Keith Fitz-Gerald is a seasoned market analyst and professional trader with more than 30 years of experience. Forbes.com recently hailed him as a "market visionary." For more investing tips and stock picks from Fitz-Gerald, go here...