CNBC's Kate Kelly asked me last January if I was worried about smaller players in the energy sector "just plain going out of business."

I replied that not only was I not afraid of the weaker players being swept away, I was counting on it.

As you might imagine, that raised more than a few eyebrows, considering oil had fallen by 51% from last summer's highs to only $52/barrel at the time, and investors couldn't hit the sell button fast enough.

But I had studied my history carefully and knew something everybody else didn't – the strong always survive.

That sounds cliché, but I'm bringing this up for a reason because this tiny nugget of information – this perspective, really – has helped turn ordinary people into millionaires for years. And it will again.

I want you to be among them.

Here's what everybody else is missing.

Setting the Record Straight on the Global Energy Outlook 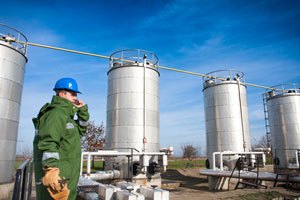 Many investors are traumatized by lower oil prices and understandably so. For years they've been fed a constant diet related to Peak Oil, higher prices, and fear at the pumps. I can't say I blame them. I read the headlines, too.

The energy crisis is reaching critical mass. As hard as it is to imagine, the low prices giving everybody else fits are a magnificent opportunity.

It's been six months since the Saudis fired the first shot in the current "oil pricing war" by unleashing 30 million barrels of oil a day on the markets. The glut caused traders worldwide to slash prices and made plenty of OPEC members unhappy.

Yet the Saudis continue to pump oil onto global markets anyway because their real target has always been the U.S. shale revolution and the threat it represents to their way of life.

You and I can debate the merits of what they're doing all day long. I think the Saudi government made an unbelievably stupid decision and completely miscalculated the outcome. You may think it's brilliant. I respect your view. Either way though, it's a moot point.

What matters is that the Saudis have deliberately created a short-term pricing disruption and, in doing so, have inadvertently created the best possible investment scenario for us.

Instead of sending U.S. oil producers packing like they planned, the Saudis have actually created an environment where the best managed, best capitalized energy companies are hunkering down, flushing out the weaker players, and emerging stronger than they were before.

Of the natural gas companies which of the top 5 would be the best to invest in.

interesting on news of the economy.

what comment do you have regarding Marlin Midstream since its dramatic fall in price?

I want to buy into the gold chip stock
I am living in Canada,how do I go about it??

How to invest in the new coming energy …….from sand!