For April 22, 2015, here's how the stock market did today, earnings reports, the top stock market news, and stocks to watch based on today's market moves... 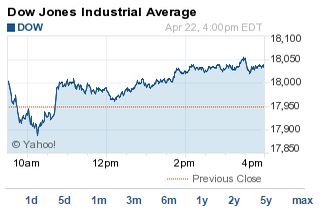 Currency swings are heightening pressures on many multinational companies. But strong housing numbers and a change in China's financial policy that will allow U.S. credit card processors to operate in the massive market gave the markets a boost today.