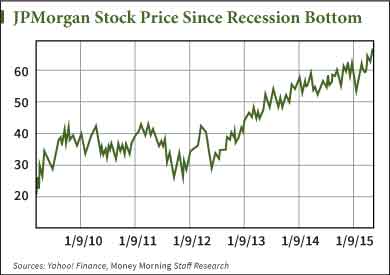 The JPMorgan Chase & Co. (NYSE: JPM) stock price seems to be breaking out.

Last week, the JPM stock price hit an all-time closing high of $67.01. It's up about 380% since the end of the Great Recession.

The story is similar for some of the other big players in financials, like Goldman Sachs Group Inc.  (NYSE: GS) and Wells Fargo & Co. (NYSE: WFC). They are up about 300% and 700%, respectively, since their recession bottoms.

"JPMorgan stock has broken out from its trading range and is doing well, as many of the big financials are," Money Morning Capital Wave Strategist Shah Gilani said.

You see, what the current JPM stock price shows is that this big bank may well be on the last leg of this long rally.

We saw in the last week JPMorgan settle a lawsuit implicating the big bank - and five others - for manipulating the foreign exchange markets. The JPM stock price has done very little since then, primarily because litigation has proven to be business as usual for the big banks as opposed to a reason for panic.

"We all know the big banks are above the law," Gilani said. "They are convicted, they admit their guilt (sometimes), and no one goes to jail - they just pay more fines."

So, this combination of the JPM stock price breaking to new highs and the big bank swallowing yet another penalty with little pain for shareholders would seem to make JPM stock a buy.

But there are still risks. Now's not a good time to buy JPM stock.

"I'm not an investor in JPM stock because of the near-term future banks face," Gilani said. "With the prospect of an event that can upend financials in the not-too-distant future - my best estimate is it will start this fall - I wouldn't touch big banks just because they've broken out."

Here's what could end up hurting the JPM stock price as early as this year...

How Regulatory Gymnastics Could Hurt the JPMorgan Stock Price

There's an inherent risk when you buy any investment bank.

I am a fan, an investor (esp J P Morgan), a conservative, Yalie +/-,
Colonial Dame, and have Connecticut Ward's in my family tree! But I am also
quite a free spirit and anxious to hear your proposed play. I'm a little sad today. Please cheer me up.
Many thanks.
Carol

presumably a lot of these positions are largely offsetting…hard to believe that much money is put in play by one centralized control….I assume a lot of traders are taking positions and without an analysis of the overall net positions, and the strength of the parties involved, it is impossible to assess risk….net risk….Still it is pretty clear that the derivative business has been a risk accelerator over many years now.

… J.B MORGAN… over here in New Zealand as a provider for Kiwi Saver Members & attached to our local Bank, KIWI BANK?… I am an investor putting my peanut money through him…

…thank you Money Morning, since started as a member to now?… i learned quite a bit!!…

TO WHO?
JP Morgan and the rest of the cartel hold about £100 trillion in 'Derivatives', what happens when Greece exits?
The only people buying stock are the banks, in their never ending fiddle, if everything was 'hunky dory' why are wages not rising, why no House building?
We don't see the 'rich' buying 'new homes', just older buildings with character that have shot up in price because immigration and no new homes has pushed prices up!
There's a big bang coming, last Thursday the banks dumped a load of 'Paper Gold' which pushed the price of gold down….again! My advice….get your dosh out fast, before the banks claim it!