Precious metals investors are always fixated on the gold-to-silver ratio.

That’s because the gold-to-silver ratio helps determine when to buy and sell the shiny metals. The ratio should be on the radar of every precious metal investor, from the novice to the sophisticated.

So, what is the gold-to-silver ratio?

Simply put, the gold-to-silver ratio is the amount of silver it takes to purchase one ounce of gold. 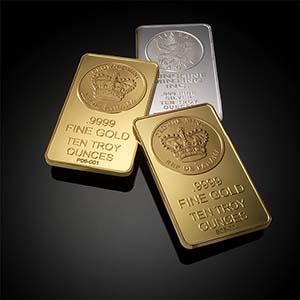 A number of websites, including Kitco, provide the current ratio. But it’s easy enough to calculate on your own.

Simply take the present price of gold and divide it by the current price of silver. The figure you get is the gold-to-silver ratio.

That means at current prices, it would take 75 ounces of silver to buy one ounce of gold.

Now that you know what the gold-to-silver ratio is and how to find it, here’s why it’s so important to investors…

How to Use the Gold-To-Silver Ratio

The gold-to-silver ratio can be used as a signal for when to buy and sell the yellow and white metals.

When the ratio is high, the general consensus is that silver is in favor. That’s because, relative to the ratio, silver is cheap.

On the other hand, a low ratio tends to favor gold and may be a sign it’s a good time to buy the yellow metal. Many “smart money” traders are apt to sell silver for gold as the ratio declines.

Since 1687, as far back as records reach, the gold-to-silver ratio has fluctuated between roughly 14 and 100.

Prior to 1900, the ratio remained relatively stable and lingered around 16. The reason for muted movement was that many countries, including the United States, used gold- and silver-backed currencies and placed legal limits on the ratio. In August 1971, however, the United States took the dollar off the gold standard, and the ratio grew more volatile.

Over the next three decades, the ratio rose as precious metal prices slipped.

“When the financial crisis hit in late 2008, gold dropped to $720, but silver fell harder to $9,” Money Morning Resource Specialist Peter Krauth said. “This caused the gold-to-silver ratio to spike to 80. Gold clearly acted as the safe haven in that time of duress.”

By 2014 average prices, the gold-to-silver ratio had settled back down around 66.

This was very interesting. I'm only beginning to invest in precious metals; it's something that my grandpa did. When he died, he left quite a bit behind and that jump started my collection. Thanks for showing my how to figure out the ratio. I'll have to keep an eye on it.