But another candidate that flourished in last night's Republican debates was a name not often mentioned by the mainstream media.

Fiorina wasn't part of the "headline" event, as her polling numbers didn't qualify her for FOX News' 9 p.m. debate. She instead participated in an "undercard" event for the candidates who didn't reach FOX News' polling threshold.

Despite being a participant in the lesser of the two debates, Fiorina shined. So much so that even the Democratic National Committee considered her a target.

But was this a fair assessment of Fiorina as CEO of HP?

Here's how some other tech stocks performed in that same time period: 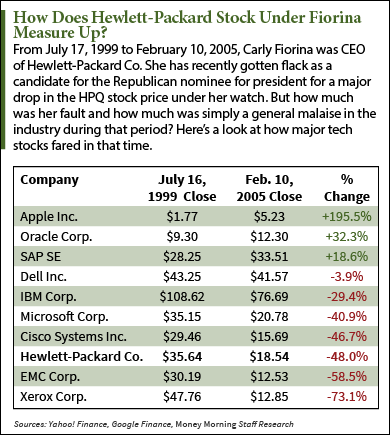 "Fiorina served as the captain of a global tech enterprise that was struggling to navigate through the troubled waters of the early 2000s," Money Morning Defense & Tech Specialist Michael A. Robinson said. "And let's be honest here. HP was a tough ship to steer."

Robinson added that Fiorina's tenure had its ups and downs.

"Fiorina instigated the merger between HP and Compaq Computer Corp. in 2002, which ultimately strengthened HP's market position and enabled the Silicon Valley pioneer to become a major player in desktops, laptops, and servers," Robinson said. "On the other hand, Fiorina laid off 30,000 people as a result of the merger."

The Bottom Line: Fiorina as a presidential candidate provides much more than what the HPQ stock price under her tenure may show. HP was a particularly difficult company to run at a time when several tech stocks were getting beat up following the dot-com bust. So it's unfair to simply point to the HPQ stock price to belittle Fiorina's "leadership" - what really matters is her experience in the world of tech, an invaluable asset to her campaign that gives her an edge.
"Technology is the engine of the U.S. economy," Robinson said. "Wouldn't it be nice if we had a president who understood the Internet of Everything, Big Data, cloud computing, and all the other paradigm-altering advances coming out of Silicon Valley at an incredibly rapid pace?"

Don't forget to check out all of our 2016 presidential election coverage here...

Nice ad for Fiorina. If you want to shill for her, you might want to stay away from the merger that is being undone right now. She was a terrible leader and it is fair to criticize her.time at HP.

Creating separate divisions is not the same thing as undoing the merger.

The HP split isn't anything at all like undoing the merger. The split will create HP (a PC, laptop, tablet, mobile, printers, etc) company for individuals and education and small business, and HP Enterprise (a server, networking, storage, services, etc) company for cloud and high performance computing and so forth. At the time of the merger neither HP nor Compaq fit either of those descriptions. This is an appropriate split of the improved (but still flawed) company that resulted from the merger (albeit, after over a decade of muddling from the board and multiple CEOs.) What it definitely is not is a return to the pre-merger state of affairs. Prior to the merger, both companies were on the wrong path for the future of IT and were each on the brink of virtual failure. As much as HP would have liked to have copied IBM and become a services company, HP did (and still does) not have the service infrastructure that IBM did (and does) have and would have failed. It would have fallen back to being a purveyor of printers and business desktop and consumer grade computers. Compaq made good consumer and business desktop PCs and laptops – once upon a time, but by 2002 had become somewhat irrelevant in the larger scheme of IT. It's products were good, but waning. How bad were they? As both an enterprise and desktop IT manager during that time (mid 90s to mid 00s), it had reached the point where I would disqualify every proposal or bid that mentioned either HP or Compaq. Neither was doing particularly impressive work at the time. So, figuring out new tech and enterprise IT (primarily hardware and infrastructure) and getting the consumer/business desktop/laptop right was just about the only option left for both HP and Compaq. I don't think either would have succeeded without the merger. The merger had negative consequences, but I think they were less than had the merger not occurred. Compaq would have eventually been absorbed, and HP would be a much smaller and less relevant company than it is today. As bad as the current HP is, it would have been even worse without the merger. Compaq would have simply disappeared into some other company, perhaps Dell or Lenovo or who knows, but any way you slice it Compaq was doomed.