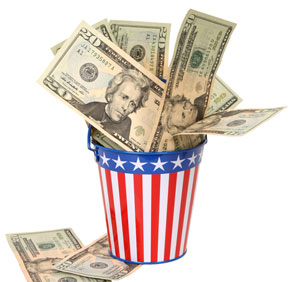 As of Aug. 31, election campaign contributions for the 2016 presidential race total roughly $250 million.

That's the amount we gleaned from the most recent OpenSecrets.org data. The site categorized the amount raised by "campaign committees and outside groups" for each Democrat and Republican candidate. In other words, OpenSecrets.org took into account cash flow going to candidates from the following sources:

"The modern presidential campaign isn't a single organization," OpenSecrets notes. "On this page, we've collected all the known groups associated with potential 2016 candidates - 97 and counting - but expect to see more pop up before the primaries begin."

Here's a look at what each candidate has brought in so far via campaign committees and outside groups...

(You'll note Donald Trump is the only candidate not receiving cash from any of these sources.)

Kindly share a Finacial Breakdown for a National Youth Lobby Group for Africa & Kenya in Particular.