Foreign governments buy U.S. debt because of the dollar's status as the world's reserve currency - the American economy has long been viewed as a safe place to invest. That's why the amount of U.S. debt held by foreign nations has increased more than six-fold since 2001.

But that's all changing now - events that could spark a U.S. economic collapse are already underway...

The Wall Street Journal revealed this week that China - the largest holder of U.S. investments - is ridding itself of its U.S. government bonds at the fastest rate in history. 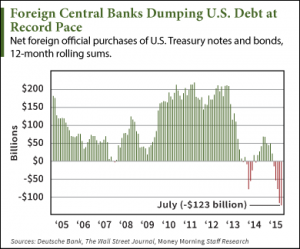 In fact, a global sell-off of epic proportion is taking place.

Central banks in China, Russia, Brazil, and Taiwan are selling U.S. government bonds at such a pace that it's caused the most dramatic shift in the $12.8 trillion Treasury market since the 2008-2009 financial crisis.

Foreign official net sales of U.S. Treasury debt maturing in at least one year hit $123 billion in the 12 months ended in July, according to Deutsche Bank Securities Chief International Economist Torsten Slok, reported WSJ. That's the biggest decline since data started to be collected in 1978.

By contrast, foreign central banks purchased $27 billion of U.S. notes and bonds in the prior 12-month period.

How Foreign Investors Can Spark a U.S. Economic Collapse

The latest Treasury data (from December 2014) shows that more than one-third of U.S. debt is owned by foreign investors.

China is the biggest foreign U.S. debtholder at 7.2%.

This gives China, along with other major foreign holders of U.S. debt, the power to drastically affect U.S. interest rates.

EAT, DRINK, AND BE MERRY…

I have been hearing this story for YEARS !! More debt and so on, but nothing so consequential as a full-on "collapse". The end result of "Calling Wolf" so often is you eventually become so much extra "noise" out there. There are many forecasts, most of them turn out to be off. There are too many "Chicken Little's" out there as it is.

Personally, I don't care if we have a collapse or war or whatever. What will be will be. Not much you can do about it. So, stop fretting and "eat, drink, and be merry…".

Thank you. I needed that badly cuz I have become obsessed lately of researching all this nonsense that I can not do absolutely the slightest thing about, except being worried and depressed about it. So again I say, thank you very much! Bless your heart!

If various foreign sovereigns are selling Treasury Debt in mass, then the only way interest rates can remain low is for the FED to pick-up the slack. As buyer of last resort, the FED can buy newly issued or rolled-over U.S. debt for awhile. Question is: How long can the FED add to their balance sheet as "buyer of last resort" ?? I notice gold has been creeping-up lately. Physical supplies of precious metals are relatively tight too.

lol, people have been predicting economic collapse since 1980 and nothing happened and believe me, the collapse will never happen unless climate change starts taking place rapidly.

The normalcy bias is on display.

Have guns, fishing poles. and know how to trap. can make bread with acorn flour, or cattails. Know how to milk a cow, and collect chicken eggs. Know where the rivers, creeks and streams are. Know how to filter water and how to distill it if need be. Economy may collapse, but I also know how to barter so what happens ,happens. I did not create America's debt , and have no intentions of trying to help pay it off. If government failed to keep the deficit under budget maybe they should all be fired, that would be a good way to start paying what they owe, put all their salaries in a single account to pay off what they owe.