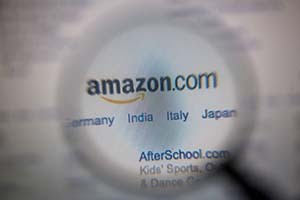 On Oct. 16, the online retail giant sued 1,114 defendants for providing false product reviews on its site. The Amazon lawsuit states these individuals offered false five-star reviews for as little as $5.00 on a website called Fiverr.com.

AMZN says its brand reputation and integrity were damaged by misleading reviews paid for by sellers seeking to improve the appeal of their products.

Amazon's lawsuit does not target Fiverr, just the reviewers involved. And these "John Doe" defendants would do well to run and hide...

If there's one thing Jeff Bezos' company is good at - besides being the world's largest retail website - it's winning court cases.

AMZN has been taken to court several times, and it has managed to litigate its way to some impressive victories. Here are four of the most notable...

Amazon Lawsuit Win No. 1: The Supreme Court ruled unanimously on Dec. 9, 2014, that workers who fill orders in Amazon.com warehouses do not need to be paid for the time they spend going through security checks at the end of the day. SCOTUS reversed a lower-court ruling in favor of Amazon employees, who alleged they spent up to 25 minutes waiting to go through security clearance at warehouses and believed they should have been compensated for the time.

After examining the Portal-to-Portal Act, which Congress passed in 1947 to exempt companies from having to pay overtime for certain activities that take place before and after a worker's shift, the High Court ruled in favor of the retail giant. The judges also took into consideration Labor Department regulations stating workers need not be paid for checking in and out of their duties, or for waiting to do so.

Amazon Lawsuit Win No. 2: AMZN derailed a proposed class action lawsuit on July 25, 2014, that alleged the company inflated prices on Amazon Prime products to offset the cost of free shipping.

Amazon's argument? "They got what they signed up for: free shipping."

U.S. District Judge John Coughenour granted Amazon's motion to arbitrate claims, reported Law360.com, which essentially meant the online retailer was allowed to settle the case outside of court to avoid major publicity on the issue.

Amazon Lawsuit Win No. 3: On Sept. 23, 2011, a federal appeals court ruled that Amazon's "one click" technology did not infringe on patents owned by software developer Cordance Corp. The software company originally filed suit in 2006, alleging Amazon's system of storing customer information with its one-click shopping option infringed on three Cordance patents. The firm sought $84 million in damages, and the claims were validated by a federal jury in Delaware in July 2010. On appeal, the U.S. Court of Appeals for the Federal Circuit concluded that Amazon, too, had its own patent for the one-click technology.

Amazon Lawsuit Win No. 4: In this lawsuit, Video Professor, a company that develops computer tutorial software, sued Amazon for bidding on the keyword "video professor" and then revealing competitive options on the linked landing page. This type of fact pattern - online retailers advertising on third party trademarks to promote competitive alternatives - has created significant confusion for trademark law.

According to the Technology & Marketing Law Blog, "Amazon doesn't win this case on First Sale grounds (although it should have). Instead, Video Professor was an Amazon vendor for a while, and Amazon makes vendors enter into a 'Vendor Manual' that contains a perpetual trademark license. Therefore, Amazon successfully defended its keyword purchases as being authorized by this perpetual trademark license."

You Can't Handle the Truth! Benghazi panel members are set to resume the hearing on Thursday, Oct. 22. After months of anticipation, Democratic presidential front-runner Hillary Clinton will testify before the House Select Committee that is investigating the 2012 terrorist attacks in Benghazi, Libya. Will she explode in front of the court this time like she did in 2013?