The long-anticipated Hillary Clinton Benghazi hearing kicked off this morning. 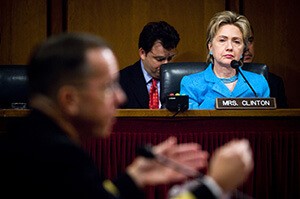 Democratic Presidential front-runner and former Secretary of State Hillary Clinton sparred with Republican members of the House Select Committee for three hours and twenty minutes before both parties recessed around 1:20 p.m. ET.

(To recap: this is an investigation into the Sept. 11, 2012, Benghazi attack that killed U.S. Ambassador Chris Stevens and three other Americans.)

Benghazi Committee Chairman Rep. Trey Gowdy (R-SC) opened the hearing by reiterating that the investigation is not about Clinton or politics. It is about justice for the four killed during the attack. Gowdy has been under increasing pressure from Democratic committee members to end the investigation.

Clinton's demeanor remained well-rehearsed and calm today. That's a big contrast to her 2013 Benghazi testimony, which was chock full of outbursts and provoked harsh criticism.

Clinton's behavior today suggested just how aware she is of what's truly at stake - her shot at the presidency.

Here are the three toughest questions Clinton had to face in "part one" of the Benghazi hearing today - and how she answered them....

Hillary Clinton/Benghazi Question No. 1: Republican Rep. Jim Jordan (R-OH) asked Mrs. Clinton why she told Americans the Benghazi attack was a response to an infamous YouTube clip mocking Muslims - but emailed it was a terrorist attack to the Egyptian prime minister and family.

"You can tell the Egyptian prime minister it's a terrorist attack, but you can't tell your own people," Jordan scolded.

Hillary Clinton/Benghazi Answer No. 1: Clinton gave a roundabout answer. "During the day on September 11th ... there was a very large protest against our embassy in Cairo. Protesters breached the walls. They tore down the American flag. And it was of grave concern to us because the inflammatory video had been shown on Egyptian television, which has a broader reach than just inside Egypt. And if you look at what I said, I referred to the video that night in a very specific way. I said, some have sought to justify the attack because of the video.

"I used those words deliberately, not to ascribe a motive to every attacker, but as a warning to those across the region that there was no justification for further attacks.

"And, in fact, during the course of that week, we had many attacks that were all about the video. We had people breaching the walls of our embassies in Tunis, in Khartoum; we had people, thankfully not Americans, dying at protests. But that's what was going on, Congressman."

Hillary Clinton/Benghazi Question No. 2: Rep. Martha Roby, an Alabama Republican and a former attorney, homed in on an email sent between two secretary of state workers during her interrogation.

The email said that the two workers weren't sure if Clinton knew the United States was still in Benghazi and included the line "(Secretary Clinton) asked last week if we still have a presence in Benghazi - I think she would be upset to hear that yes we do but because we don't have enough security (because) they are on lockdown." The emails highlight the concerns about security at Benghazi compounds and the need for increased personnel there.

"This is very troubling to me," Roby said. "It's frustrating for us here on this panel to hear you in your opening statement talking about the responsibility you took for the State Department ... and you're brushing it off."

Hillary Clinton/Benghazi Answer No. 2: Clinton denied she was unaware of the U.S. presence in Benghazi and said the two employees were not part of her staff but did work for the State Department. "Of course I knew we had a presence in Benghazi," Clinton responded.

Hillary Clinton/Benghazi Question No. 3: Rep. Susan Brooks (R-IN) noted a significant drop off in Clinton's correspondence regarding Libya in 2012 compared to 2011. It was in 2012 that the attacks occurred - which begs the question, why wouldn't there be more emails in 2012, as security issues clearly had intensified?

Brooks began her questioning of the Democratic presidential front-runner by pulling out one large and one small pile of printed Clinton emails. She said the larger pile represented 795 emails Clinton sent or received concerning Libya from February to December 2011. The smaller pile, however, represented the 67 emails Clinton sent or received about Libya from early 2012 until the day of the Benghazi attacks.

"And so let me go back to the risk in 2011, because there was a lot of communication, again, once again from your senior staff, from the State Department to you or from you in 2011. And in fact, that is when Gadhafi fell. He fell in 2011," Brooks said. "But then when we go to 2012, Libya, Benghazi, Chris Stevens, the staff there, they seem to fall off your radar in 2012, and the situation is getting much worse in 2012. It was getting much worse.

"So my question is, this was a very important mission in 2011, you sent Chris Stevens there. But yet when your compound is attacked in 2012, what kind of culture was created in the State Department that your folks couldn't tell you in an email about a bomb in April of 2012?"

Hillary Clinton/Benghazi Answer No. 3: "Well, Congresswoman, I did not conduct most of the business that I did on behalf of our country on email. I conducted it in meetings. I read massive amounts of memos, a great deal of classified information. I made a lot of secure phone calls. I was in and out of the White House all the time. There were a lot of things that happened that I was aware of and that I was reacting to.

"If you were to be in my office in the State Department, I didn't have a computer, I did not do the vast majority of the work on my email. And I bet there are a lot of Sid Blumenthal's e-mails in there from 2011 too."

Petroleum Permeates Nearly Every Corner of Our Economy: For example, just recently it was revealed that low oil prices were going to hurt elderly Americans in particular. Last week, the federal government announced it will not increase the cost of living adjustment (COLA) for fiscal 2016 due to low gas prices. Here are four other less-considered ways the price of oil impacts our lives...