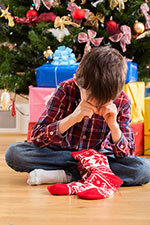 Peter Schiff - renowned economist and the contrarian investor at the helm of Euro Pacific Capital - predicts Christmas 2015 will be far from merry and bright.

"I expect [job] layoffs to start picking up by the end of the year," Schiff said on CNBC's "Futures Now" on Nov. 5. "Retailers have overestimated the ability of their customers to buy their products. Americans are broke. They are loaded up with debt," he said. "We're teetering on the edge of an official recession," and "the labor market is softening. Most of the economic news that we get is consistent with recession, not recovery."

Schiff has been famously bearish about U.S. markets. The investor predicted the 2008 financial crisis. Next up, he says, is a U.S. dollar crash.

And the U.S. Federal Reserve is to blame.

"If you read the original mandate, it's very clear the Fed was created to prevent a banking crisis. But the modern Fed mandate is to control inflation and employment - those are very different. I don't think this modern interpretation is accurate; I think the Fed is messing with things," Fitz-Gerald said back on May 14.

"The Fed has gone from indirect influence to manipulation. The markets would fix this mess if left to their own devices, by bleeding excess risk out of the system. But the Fed doesn't want to allow that to happen. Instead, it has interpreted its mandate as preventing crisis - yet in reality, it is creating a far bigger crisis down the road."

This Number Makes Us Think the Market Rally Is Over: U.S. markets have rallied this fall. In the last five weeks ending Nov. 6, the Dow jumped by 8.5%, while the S&P 500 soared by 8%. The Nasdaq outdid them both with a 9.38% performance. So it's no surprise you're wondering, as we sit here at the beginning of November, whether Santa Claus came early or whether the market will keep "melting up" through the end of the year. And I bet you're not the only one. Here's the number we are looking at...