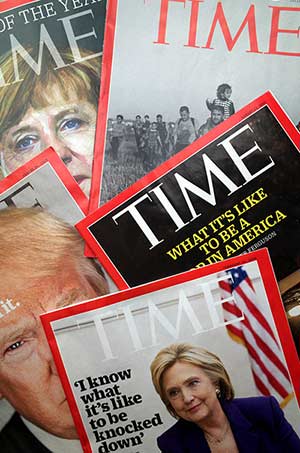 Trump and Clinton both top their nearest competitors by large margins.

A new nationwide CNN/ORC poll conducted Feb. 24-27 has Trump and Clinton in the lead by large margins. On the Republican side, the real estate mogul beats his second-place rival Sen. Marco Rubio by more than 33%...

On the Democratic side, Hillary Clinton tops Vermont Sen. Bernie Sanders 55% to 38%.

But as we head into March 1 -- Super Tuesday, one of the most important days in any presidential election cycle -- the two top pollsters find themselves embroiled in controversy...

The public will soon see just how popular the two leading candidates truly are.

Here's a look at the political debacles that will influence voters on the biggest election day of the year...

Originally, a federal judge asked the State Department to produce all of Clinton's emails by the end of January.

But instead, we're left with a controversy...

State Department officials are set to release the final batch of Hillary Clinton's emails today -- one day ahead of Super Tuesday. This will end the 10-month process during which more than 1,800 of Clinton's emails were eventually found to contain classified information. Agency officials said they accidentally overlooked thousands of pages of correspondences. These overlooked emails needed to be sent to outside agencies for review. The State Department asked the court to extend the deadline to Feb. 29, which it did.

It isn't clear whether there will be emails held back from the public due to "top secret" information in today's batch. We'll just have to wait and see...

Donald Trump is trying to fix a mess involving the Ku Klux Klan's grand wizard David Duke. Last week, Duke announced his support of the GOP front-runner on his Twitter and Facebook feeds.

Yesterday, Trump was asked about his latest big-name supporter on CNN's "State of the Union." The candidate refused to disavow Duke's endorsement, creating a wave of negative attention, especially from his GOP rivals.

This morning, however, Trump told NBC's "Today" show that the confusion stemmed from a bad earpiece during the interview.

"I was sitting in a house in Florida with a bad earpiece," the real estate mogul said. "I could hardly hear what he's saying. I hear various groups. I don't mind disavowing anyone. I disavowed Duke the day before at a major conference." 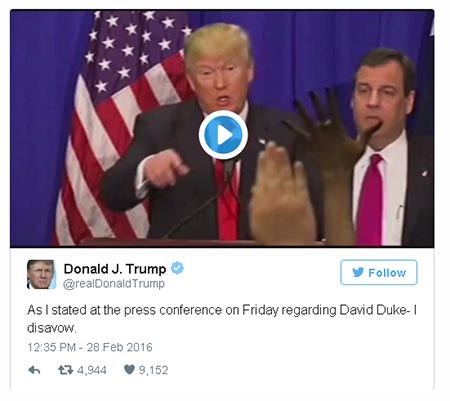 While Trump has clarified the controversy, Hillary Clinton has failed to comment on this bizarre oversight...

It is standard practice to suspend one's clearance pending the outcome of an investigation, reported FOX News.

But that's not what happened to a senior Hillary Clinton aide embroiled in the email scandal. The aide has been allowed to maintain her top secret security clearance, reported FOX News earlier today.

This information was revealed in two letters to and from Senate Judiciary Committee Chairman Charles Grassley (R-IA). The first letter, dated Oct. 30, 2015, revealed that Clinton's former Chief of Staff Cheryl Mills still had "top secret clearance." On Feb. 16, a second letter from the State Department's assistant secretary for legislative affairs to Grassley revealed that an "administrative error" had allowed Mills to maintain her clearance.

Coburn said Rubio was the only Republican candidate made in the mold of former President Ronald Reagan. Coburn also took the opportunity to bash Trump, claiming he was "perpetuating a fraud," reported The Oklahoman.

On Sunday, The New York Times began a three-part series about how Libya evolved into a failed terrorist state. As of today, two segments have been published, and they depict massive failures on the former secretary of state's part.

The expose claims Clinton first pushed the country into the Libyan "civil" war and then did nothing about the threat of what came next...

The Fed Will Make the Crash Worse: Stocks rallied for the second straight week on light trading volumes as investors delayed the next leg down in the bear market for at least another week. Don't expect those gains to last long, though...