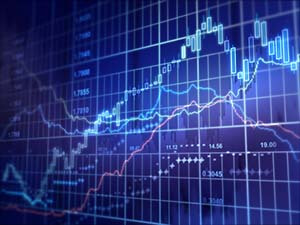 Dow Jones Industrial Average News, 4/25/16: Monday was another day of oil price volatility and weak earnings reports to complement Wall Street's already underwhelming expectations. Some might think that the U.S. Federal Reserve's two-day meeting that kicks off tomorrow might have something to do with the downturn. The Fed, however, is not going raise interest rates this week, as weakness in the manufacturing sector and concerns about other areas of the economy weigh on sentiment.

Today, shares of Apple Inc. (Nasdaq: AAPL) slipped 0.5% and were the heaviest drag on the Nasdaq and the S&P 500. Meanwhile, shares of Goldman Sachs Group Inc. (NYSE: GS) fell 1.2% – the Dow's biggest weight – despite news that the company plans to start taking deposits online.

It's Warren Buffett's world, and we're just living in it. This weekend, the 85-year-old Chairman of Berkshire Hathaway Inc. (NYSE: BRK.A, BRK.B) will cap his 52nd year at the helm of the conglomerate during the company's annual shareholder meeting in Omaha, Nebraska. Buffett and others at Berkshire are expected to address a number of issues, including a possible successor to the Oracle of Omaha, its stance on American Express Co. (NYSE: AXP), and the potential for more takeover deals in 2016 and beyond.

The deal offers keep coming as organic growth dies on the vine in the U.S. economy. The latest big offer came from USA Today publisher Gannett Co. (NYSE: GCO). The publishing giant made an unsolicited bid of $815 million (including debt) for rival Tribune Publishing Co. (Nasdaq: TPUB). Tribune – which publishes the Los Angeles Times and the Chicago Tribune – refused to engage in talks with Gannett, but said that it is reviewing proposals. TPUB stock was up more than 63% on the day.

Meanwhile, in a big win for investors, the U.S. Justice Department formally approved the merger between Charter Communications Inc. (Nasdaq: CHTR), Time Warner Cable Inc. (NYSE: TWC), and Bright House networks. Charter aims to close a deal for Time Warner Cable worth $78 billion and Bright House worth $10.4 billion. This is just another hurdle. The deals still must be approved by the Federal Communications Commission (FCC).

On the economic front, the housing market showed increased signs of weakness in March, renewing concerns about the strength of the U.S. economy. New construction, single-family home sales fell in March by 1.5%, according to the U.S. Commerce Department. The agency said that most of the decline was concentrated in the Western portion of the country. Shares of homebuilder KB Home (NYSE: KBH) slipped 1.6%, while rival Toll Brothers Inc. (NYSE: TOL) fell by 1%.

The bears are out in force for oil prices today. WTI oil prices fell 2.2%, while Brent crude dropped 1.2% after a number of banks warned about a flurry of bearish forces that could push prices down even further. At the center of the analysis, the banks feel that the recent two-month rally in crude prices has defied underlying fundamentals. Domestic supply continues to swoon, and traders have reason to worry about the potential for a production freeze among OPEC producers.

This Penny Stock Will Double Your Money – and Save a Dying U.S. Industry: Finding a truly appealing penny stock isn't easy, which is why this one is interesting. Not only is this green energy stock capable of a gain of 100% or more, it's just now rolling out technology with the potential to rescue the struggling coal industry. But this 21st century success story has only just begun, making now the perfect time to buy this stock.