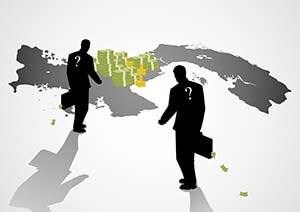 The "Panama Papers" database went live and searchable yesterday, lifting another veil of secrecy from thousands of offshore shell companies and the people who use them.

The massive cache of data was obtained from Mossack Fonseca, the Panamanian law firm responsible for orchestrating these illicit financial transactions. It revealed Ponzi schemers, drug kingpins, tax evaders, and at least one jailed sex offender…

After the initial record-breaking leak on April 3, many were left wondering why there weren't more Americans listed in the damning documents. Their noted absence lead the media to assume they needn't go so far as the Caribbean in search of a tax haven when there are plenty right here at home.

But in this second release, it seems there were U.S. citizens involved in Mossack Fonseca's money laundering business.

Among the three dozen Americans revealed yesterday were:

Frankel became notorious for his lavish lifestyle, which included purchasing jewels, furs, luxury cars, and a compound where he recruited women "through advertisements in alternative publications."

Since his felony arrest, Wiederhorn has been running a Los Angeles-based burger chain without incident.

Here are a few other notable American "gems" named in the second Panama Papers dump, including one former NFL star and a Virginian woman named "Rebel"…

In 1994, the U.S. Securities and Exchange Commission (SEC) sued Gotshalk for providing investors with "false and misleading information" about a company involved in oil and gas investments. Then in 2004, an Oregon court convicted him of theft, sentenced him to 20 months in prison, and ordered him to pay a fine. In 2010, federal prosecutors in Philadelphia unsealed an indictment against him, claiming he was part of a scheme to inflate the price of tech company stocks.

In spite of all these charges, Gotshalk was still able to open an offshore account through Mossack Fonseca.

However, back in Virginia, Holiday was under investigation by state securities regulators for misleading investors in her enterprise and selling unlicensed securities.

In July 2013, Holiday said the collectibles business just didn't work out and that she herself let the company lapse.

But in November 2013, the State Corporation Commission of Virginia fined Holiday $110,000 and banned her from selling securities in the state.

What's the State of the Economy? While most states have recovered from the Great Recession – they have not all done so equally. Some states are thriving now, like energy-rich Alaska and the Dakotas. But others – with big pension responsibilities – are trailing far behind, like these…