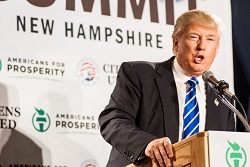 From claims that every woman on "The Apprentice" flirted with him to name-calling his opponents "little" and "crooked," it's no surprise that Donald Trump quotes make waves.

But his most avid supporters point to a book Trump authored 19 years ago, "Trump: The Art of the Deal," to argue the opposite. They say his quotes therein show exactly the kind of wisdom and mindset necessary to take on the status quo in Washington.

Best Donald Trump Quotes No. 5: "To me it's very simple: If you're going to be thinking anyway, you might as well think big. Most people think small, because most people are afraid of success, afraid of making decisions, afraid of winning. And that gives people like me a great advantage."

Even as far back as 1987, Trump was focused on winning. Now, his supporters hope he can use his skillset as a businessman to run America and make it "win" again.

Best Donald Trump Quotes No. 4: "You do your thing, you hold your ground, you stand up tall, and whatever happens, happens."

The Donald wrote this to describe how to handle a fight. But, even though he wrote it 19 years ago, it perfectly describes his 2016 presidential campaign.

Best Donald Trump Quotes No. 3: "I don't spend a lot of time worrying about what I should have done differently, or what's going to happen next."

Trump's detractors believe he is too much of a wild card to be the next President of the United States. He's known for speaking his mind and not being politically correct — but that's exactly why his supporters love him.

There's one thing Donald Trump has never been accused of: A lack of confidence. And his next words really inspired his biggest followers.

Best Donald Trump Quotes No. 2: "One of the problems when you become successful is that jealousy and envy inevitably follow. There are people — I categorize them as life's losers — who get their sense of accomplishment and achievement from trying to stop others. As far as I'm concerned, if they had any real ability they wouldn't be fighting me, they'd be doing something constructive themselves."

Trump is known as a "doer" — it's one reason he has enjoyed so much support. Voters are tired of gridlock in Washington, and Trump supporters think an outsider can make things happen.

Best Donald Trump Quotes No. 1: "The final key to the way I promote is bravado. I play to people's fantasies. People may not always think big themselves, but they can still get very excited by those who do. That's why a little hyperbole never hurts. People want to believe that something is the biggest and the greatest and the most spectacular."

Trump doesn't always offer specifics on his plans. But his rhetoric of bringing back jobs from overseas, building walls to stop illegal immigration, and the idea of making America great again have struck a chord larger than any political pundit expected.