Imagine traveling from Chicago to New York at nearly the speed of sound.

Your trip takes barely an hour.

And imagine that your ride is so quiet you can hear a pin drop - no whirring engines disturbing your nap or breaking your train of thought.

And it's all solar powered and driven by magnets.

Of course, I'm talking about a whole new transit system, one at which you glide along elevated tubes at 760 miles per hour.

But I'm also talking about something more: the dawn of a new era in transit technology, one that will upend how people travel, where they live, and the way they work.

Now, I know that the new field of Hyperloop transportation has plenty of critics who say this new way of moving from place to place will never work.

But to my way of thinking, those critics sound like the naysayers at Kitty Hawk who swore "it'll never get off the ground." But the Wright brothers succeeded where so many had failed before.

So today I'm going to show you just why the doubters are dead wrong once again, and why the Hyperloop really could become the fifth great transit mode... 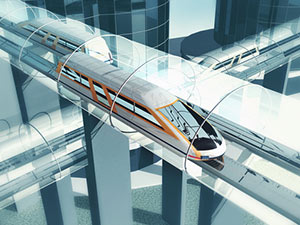 I have followed transportation technology my entire adult life. I grew up in a military household where high technology and things like jet aircraft were a constant topic of conversation.

I cut my investing teeth as an auto analyst in Detroit, where I spent my days talking to senior execs, designers, and engineers from all over the world.

In all those years, I have never seen a major breakthrough that holds as much promise as Hyperloop transit holds today.

I believe this technology will one day be recognized as the fifth great transit mode, after boats, trains, automobiles, and airplanes.

As you read about this system, bear in mind that it was dreamed up by none other than the visionary Elon Musk in a paper that first appeared just under three years ago.

As the brains behind both SpaceX and Tesla Motors Inc. (Nasdaq: TSLA), Musk knows a thing or two about revolutionary modes of transport.

As I said, Hyperloop gets knocked as nothing more than hype that can't possibly work.

Why have the Russians already said they want to install two loops?

And why did a Los Angeles-based startup firm strike a  mid-June deal in Russia to study how and where a Hyperloop system would operate in Moscow - one of the world's more congested cities where commutes consume from 90 minutes to four hours of peoples' time each day?

Shervin Pishevar is the chairman and co-founder of Hyperloop One. He sees easing urban gridlock as just one potential use for Hyperloops. And he has a solution to slash that commute to "a fraction of what it is today."

His firm has partnered in this key new design study with Russia's Summa Group, the country's top provider of engineering, logistics, and construction services. Those two firms are talking about placing a Hyperloop in the far east of Russia.

Pishevar is also looking at placing systems in Finland, Sweden, Switzerland, and Dubai.

Two Rivals Gear Up for Battle

Pishevar knows how to cash in on innovated transportation technology. As a venture capitalist, he bought an 8% stake in Uber for $26 million. Today, that stock is worth more than $500 million.

And he's not the only one who sees the chance to make money on this new transit system.

Rival Hyperloop Transportation Technologies (HTT) recently cut a deal to explore a Hyperloop that would connect major Eastern European cities such as Vienna, Budapest, and Bratislava.

The two firms are traveling very different roads towards their goals. Hyperloop One is backed by millions in venture capital and has more than 100 full-time employees. The workers hail from such tech leaders as Tesla, Boeing Corp. (NYSE: BA), and SpaceX.

HTT is more of a "virtual" firm, with 500 engineers, scientists, and other experts that have banded together on a crowdsourcing website. Each of these virtual employees receives, in lieu of income, shares in the still-private company.

HTT has already begun building small-scale "proof of concept" prototypes and is talking with more than a dozen governments about installing Hyperloops.

For its part, Hyperloop One is consulting with some of the world's top transportation firms. Engineering giant Aecom, industrial designers Arup, Swiss tunneling firm Amberg Group, and French railroad engineering firm Systra are all contributing their expertise.

The Future Is Already Here

The Ins and Outs of Hyperloop Technology

The technology already exists to make Hyperloops into a reality. It's just a question of bringing it all together.

Before Hyperloops come into their own, a number of key challenges will need to be overcome.

While Hyperloops may seem like something right out of "The Jetsons," they rely on technologies that already exist today.

For instance, Hyperloop pods don't ride on wheels. Instead, they derive power from a series of magnets that move along a track, a process called magnetic levitation (maglev).

Maglev technology already powers the world's fastest train, the one that shoots along at 270 MPH and covers the distance between Shanghai's airport to the city center in just eight minutes.

You can spot maglev trains in Japan and South Korea as well.

And as speedy as maglevs are, Hyperloops can go more than twice as fast.

Another key enabling technology is pneumatic tubing. The oversized tubes used in Hyperloops are really just larger versions of the tubes your bank uses to send you those little canisters at the drive-thru window.

Another piece of the puzzle: a massive air compressor that sits at the front of the pod, removing the air pressure that would slow the system down.

So as you see, unlike many pie-in-the-sky innovations, Hyperloops aren't waiting around for some brand-new technology to be designed from the ground up. Instead, this revolution just needs a way to put a few existing technologies together so they can work as one.

Critics scoff that, with construction costs ranging from $5 million to $20 million per track-mile, Hyperloops are simply too costly to use in the real world.

But even at $20 million per mile, the Hyperloop will still be cheaper than China's maglev train, which costs $35 million per track-mile to build.

To be fair, I should point out that critics and naysayers aren't the only ones putting out misconceptions.

Some over-enthusiastic promoters have gone so far as to say that Hyperloops could one day eliminate the need for automobiles.

Now, that's just not going to happen, not in America. You'll never get people to give up their cars for good. Not even to travel at the speed of sound.

Nor do I believe the Hyperloop will get rid of air travel, at least not for decades.

But experts do say we may see the first Hyperloops go into operation as early as 2021. Five years after that we may see dozens of them around the globe.

HTT is building a test loop in Quay Valley, California, that should be ready by early 2018. When it arrives, global makers will be able to see for themselves just how revolutionary this technology is. Contract signings could start flowing pretty quickly on the heels of those test trials.

Hyperloop One is also making rapid progress. It successfully tested the propulsion system for the first time in April. Now it's building a test track.

Bear in mind that these Hyperloop efforts are all being financed by pure, "old school" capitalism. Nothing is being paid for with your tax dollars.

Which brings me to a key final point. Right now, the major firms involved with Hyperloops are privately held.

That means at present there is no direct way for retail investors to participate.

But I believe that'll change, and that we'll soon see ways to invest, perhaps by acquiring stakes in key suppliers - similar to how we can profit off of mobile phones by investing in semiconductor firms.

So, expect me to report back to you about the progress of this amazing new technology.

And as I find ways to profit from the field, I'll be sure to let you know.

Up Next: High Tech Is About to Send This Strategic Metal Soaring