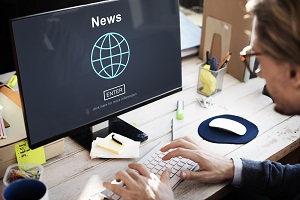 For mainstream media "fact-checkers," the GOP is often automatically presumed "wrong." Sometimes the media gets it right – like when The Washington Post pointed out in August 2015 that Trump's claim the U.S. unemployment rate was actually 42% was waaaaaaay off. (Look, we don't swallow the government's "official" 4.9% current unemployment rate either, but 42% is just unheard of.)

Other times, however, it's the media that's waaaaaaay off.

This is especially true when it comes to the press' critiques of Republican presidential candidate Donald Trump's speeches.

If Trump is right about an issue, the talking point monkeys rarely admit it.

And that's exactly what they're struggling with today – acknowledging that Trump spoke a lot of truth in his RNC acceptance speech last night (Thursday). Particularly when it came to crime in America.

"Homicides last year increased by 17% in America's fifty largest cities. That's the largest increase in 25 years. In our nation's capital, killings have risen by 50%. They are up nearly 60% in nearby Baltimore. In Chicago, more than 2,000 have been the victims of shootings this year alone. And more than 3,600 have been killed in the Chicago area since [President Barack Obama] took office. The number of police officers killed in the line of duty has risen by almost 50% compared to this point last year."

The Highest Bidder Wins… the Presidency: When you head to the polls in November, our next commander in chief will have already been picked. Wealthy bidders have long been at work exploiting loopholes to funnel "dark money" into the election. Here's how they'll decide who's boss…

Now the mainstream media did its darnedest to discredit the numbers Trump presented.

But in this case, if you look closely at a few of the news outlets' flustered attempts – which Money Morning did – you'll see they are grasping at straws…

For example, CNN wrote this morning: "We're going to rate Trump's claim about police deaths as true, but misleading, because even though police shooting deaths are up by a significant amount from this time last year, they are not far off from the annual average [of officer shooting deaths]."

Note right away that CNN focused on "shooting deaths" when Trump actually said "police officers killed in the line of duty has risen by almost 50%."

But we'll go with it. That annual average of "police officer shooting deaths" — again, not officers killed in the line of duty (Trump's words) — has been 50 per year over the past decade. Currently, 31 officers have been killed by gunfire this year – we're only 19 shooting deaths away from that national average. This time last year there had been 17 officers killed by gunfire, according to Officer Down Memorial Page. That's 33 officers short of the annual average.

As we stand, the country is currently at a 46% increase in officer shooting deaths between July 2015 and July 2016.

But, as CNN pointed out, if officer deaths by gunfire occur at the pace they've been averaging over the past decade, then 2016 can expect to see approximately 56 officers killed this year.

This is "close enough" to the national average of 50 for CNN. Therefore, according to the mainstream media source, that makes Trump's statement "misleading."

Only because he can't predict what the 2016 average will be. That's a pretty weak "gotcha" moment from CNN.

Also on the "Bash Trump" bandwagon was Seema Mehta, a Los Angeles Times correspondent covering what fact-checkers wrote last night about Trump's crime stats. She said they were "mostly accurate."

"Donald Trump's crime stats are mostly accurate but his conclusions are a stretch."

"While the statistics [Donald Trump] used were largely accurate, his conclusion was overreaching, according to independent fact checkers.

"While there have been sharp recent increases in homicide rates in certain parts of the country, overall murder rates are the lowest they have been in decades, according to factcheck.org. Additionally, a snapshot offered by looking at a couple years is insufficient to determine whether there is a new trend.

"In terms of specific statistics, Trump was accurate when he talked about a 17% year-over-year increase in homicides in the nation's 50 largest cities; and the murder rates in Washington, D.C., Baltimore, and Chicago.

In that last paragraph, Mehta claims that Trump said "the number of police officer deaths has risen nearly 50%."

Now look again at what Trump said: "The number of police officers killed in the line of duty has risen by almost 50% compared to this point last year."

They're actually both wrong.

Let's Do the Time Warp Again: Americans had the exact same concerns about Reagan during the 1980 presidential election that they do about Trump now. Have a look back in time…

The right answer is: The number of police officers killed by gunfire has gone up almost 50% (to be more precise, it's 46%, remember?).

Last but certainly not least, The Miami Herald chimed in this morning.

"[Donald Trump's statement that 'homicides last year increased by 17% in America's 50 largest cities. That's the largest increase in 25 years' comes from a credible source – calculations made by The Washington Post. However, in painting a bleak picture, Trump cherry-picks The Post's overall findings – and makes mistakes criminologists warn about.

"The Post acknowledged that FBI data found a smaller increase in recent years, with contradictory results for many cities. And experts caution against putting too much stock in short-term changes, since year-to-year data can be volatile for hard-to-discern reasons.

"Then there's the backdrop of overall falling crime. [Trump's] statement contains an element of truth but ignores facts that would give a different impression, so we rate his claim Half True."

Essentially The Herald is chiding Trump for not stating the entirety of what The Post concluded in its calculations.

But that is not how a politician – or any public figure – delivers pertinent facts. The "cherry-picking" accusation is how public speakers convey their messages. They point out the pertinent facts.

And these facts that Trump used were 100% true. The Herald admits as much.

Were Donald Trump to have included everything the Floridian news outlet points to as having been intentionally omitted, thereby making part of the reality TV star's acceptance speech "half-truthful," he would have had to mention the details like those disclaimers you hear in radio ads.

You know what we mean…

Up Next: Even from Behind Bars, Bernie Madoff Is Annihilating Hedge Funds Left and Right