With "fintech" graduating from little more than a buzzword a couple of years ago to emerging as a $6.5 trillion opportunity, it's time to look at the best stocks to buy now to play this lucrative trend.

Most of the action in fintech (a portmanteau of "financial technology") is rooted in the blockchain, the technology that underpins the digital currency Bitcoin. Both Silicon Valley and Wall Street agree that blockchain technology will have a revolutionary impact.

And while blockchain technology will eventually have widespread uses, the first area to adopt it on a large scale will be the financial industry.

A new Credit Suisse Group (NYSE ADR: CS) report estimates that 75% of the economic activity of the financial and insurance industries will have migrated to the blockchain by 2025 - less than 10 years from now.

That works out to $2.15 trillion of financial sector activity running on blockchain technology - a huge opportunity both for the companies that can exploit it as well as investors in those companies. 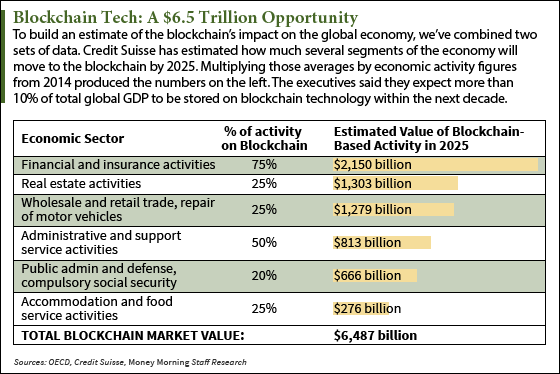 And the financial industry has plenty of ways to tap into this opportunity...

What the Blockchain Can Do for Financial Industry

The main benefits include lower operational costs, faster settlement times, reduced risks, lower cost of capital and, best of all, the chance to develop new sources of revenue.

A joint study last year by Santander InnoVentures, Oliver Wyman, and Anthemis concluded that advances in fintech could save $15 billion to $20 billion just from the financial industry's clearing and settlement costs.

Besides enhancing profitability, the financial industry is also pushing for rapid adoption of blockchain technologies as a defensive strategy. They realize that if they don't embrace fintech, upstart companies will spring up and disrupt their business models.

While they may yet suffer some disruption, the incumbent players haven't been sitting still.

Last September the unveiling of the R3 consortium revealed just how seriously the world's big banks were taking fintech. Originally nine banks joined with startup R3 to develop blockchain tech; the consortium has since grown to 45.

But while the entire industry will gain from the rise of fintech, these stocks to buy now will fare the best...

These companies are at the forefront of the blockchain revolution:

Here at Money Morning we're not such big fans of Goldman's investing advice, but the bank knows how to make money and exploit new opportunities.

Goldman has identified blockchain tech as a priority. Its strategy includes aggressive hiring of top engineers and a willingness to invest heavily. Goldman has also invested in two blockchain startups, Circle and Digital Asset Holdings. Goldman's eagerness to embrace such a disruptive technology will pay off over the next few years.

Aside from its potential to exploit blockchain tech, GS stock is a good value now. It's trading at about $164, several dollars below its tangible book value of $170.28. The consensus analyst estimates for earnings per share forecasts growth from $14.28 this year to $21.08 in 2019, a 47.6% increase. Using the five-year average of its price-to-earnings ratio of 12.8, you get a stock price target of $269.82.

JPMorgan CEO Jamie Dimon recognized the disruptive threat that the blockchain posed back in 2014. Like Goldman, JPM is investing in the tech in-house as well as via third parties. And like Goldman, JPMorgan has the resources to fend off the disruptors while exploiting the tech for its own gain.

Earlier this year the bank conducted some trials with startup Digital Asset Holdings (run by JPMorgan alum Blythe Masters) that involved using a cryptoledger called "Juno" to move money between Tokyo and London. The experimental Juno already can handle 500 transactions per second, while the Bitcoin network can manage only seven.

Related: Why a U.S. Bitcoin IPO Is Closer Than You Think

As a leader in the payments processing and financial services industries, Fiserv is another company that could have had its lunch eaten by hungry fintech startups.

But Fiserv is aggressively investing in blockchain tech, including an investment in the startup Chain last year. This strategy will ensure FISV remains competitive. And all things being equal, Fiserv is a name its customers - mainly small and mid-sized banks -- already trust.

First Data is the credit card processing company for many retail outlets, so it doesn't have the name recognition of Visa Inc. (NYSE: V) or Mastercard Inc. (NYSE: MA). But it's a huge company, responsible for about 40% of all U.S. credit and debit card transactions.

First Data has invested in the startup Chain as well and would greatly benefit from any efficiencies blockchain tech will bring to the payments industry. Because First Data handles about 60 billion transactions a year, even tiny improvements will result in a major impact on the bottom line.

After a restructuring, First Data had an IPO last October. Today, at $13.26, FDC stock is below its IPO price. But First Data has a savvy CEO in Frank Bisignano and this year has revived growth. The potential fintech brings will help accelerate that growth.

Blockchain technology holds significant promise for stock exchanges, and Nasdaq is on the cutting edge. The company plans to make the tech a central part of its operations - and has already made good progress toward making that a reality.

Nasdaq was the first major exchange in the world to use the technology (last year on the Nasdaq Private Market). Nasdaq has also tested a blockchain-based proxy voting system (on Estonia's Tallinn Stock Exchange).

Nasdaq officials recognize the vast benefits of harnessing the efficiencies of blockchain tech on the back end of trades - the part that involves record-keeping and settlement. Another benefit would be the ability to make this data available to all parties (traders, banks, regulators, etc.) at the same time. Best of all, the blockchain tech Nasdaq has developed so far is proprietary.

Next Up: Why This CEO Wants to Cancel Earnings Season Forever