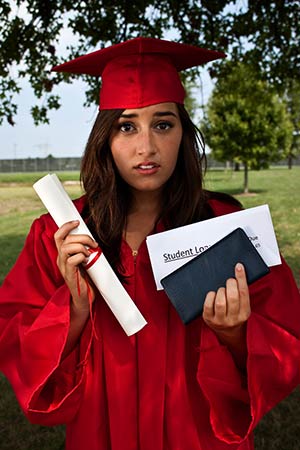 Students have amassed $1.4 trillion in debt and counting, according to Collegedebt.com. But on top of crippling debt loads, borrowers also have to worry about a massive rise in student loan scams...

These scams are being pushed under the guise of "student debt relief." They are designed to trick borrowers into paying money to lessen their financial burden.

Scammers offer to help loan borrowers for a fee. Then, instead of providing advice tailored to each borrower's situation, the scammers offer advice that can be obtained from the government for free.

According to a study conducted by NerdWallet (a personal finance website that helps people manage their money) and a student loan advocacy group, nearly 60% of the 6,300 student loan borrowers sampled stated they saw ads for these "relief programs."

Trending: Donald Trump Will Win the Election, According to Highly Predictive Indicator

And a shocking percentage of borrowers take the bait...

Student Aid Center, a Florida-based debt relief company, made more than $36 million by hooking students with ads like, "$17,500 in Up-Front Forgiveness?"

Sure enough, it was too good to be true...

District Attorney General Karl A. Racine found evidence that the company was charging $600 to $1,000 for debt relief services, but all the company did was mail out paperwork borrowers could obtain for free.

There is currently a lawsuit pending against Student Aid Center, according to The Washington Post.

Student loan scams are working because of the confusion surrounding options for student loan debt reduction.

Under President Barack Obama, the Department of Education expanded the programs borrowers can use to manage their debt in July 2015.

But scammers use these new programs -- and the general confusion with student loan repayment plans -- to take advantage of borrowers. According to MarketWatch, scammers advertise their "student debt relief programs" with government logos and phrases that use President Obama's name.

About 9% of the people who responded to the aforementioned NerdWallet survey said they paid for student debt relief programs. These individuals spent an average of $613 -- when the information they received should have been totally free.

According to MarketWatch, Adam Minksy, a lawyer who works with student loan borrowers, suggests that the problem won't be solved any time soon. He noted that for every one scammer that is shut down, three show up in its place.

"These debt relief scams are feeding on the frustrations and the desperation of people," Minsky said. In Minsky's opinion, the only way to shut down student loan scams is through a total overhaul of the federal student loan system. He feels there needs to be more regulations governing student loan services.

Minsky said that once the system is fixed, people will no longer feel the need to turn to these debt programs in the first place.

Do you think the government is doing enough to help students?  Let us know on Twitter @moneymorning and Facebook.