The U.S. government has dramatically picked up its prison spending rate over the past three decades…

In fact, Uncle Sam's incarceration spending rate is three times what it was 30 years ago.

And when compared to the average education spending rate, a disturbing priority shift has emerged.

A U.S. Department of Education analysis released on July 7 compared the changes in state spending on corrections versus on education between the years 1979-1980 and 2012-2013.  It revealed that right now, the state prison spending average is currently about 1/8th the size of the state pre-K through 12 spending average: 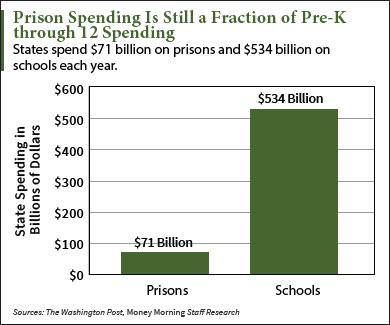 In other words, government spending on the education of America's youth still dwarves its spending on prison programs, $534 billion to $71 billion.

But what's alarming is the ratio between the two expenditures is closing at an astounding clip.

You see, the combined state and local prison spending used to be 1/16th the amount of what the U.S. government spent just two decades ago, in 1990.

And if you go back three decades – to around 1980 – this expenditure gap becomes even more obvious. 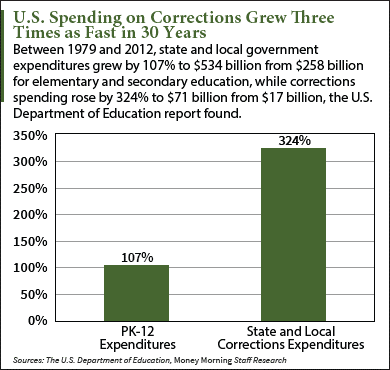 While the study found prison spending has risen three times as rapidly as school spending in the past three decades, the U.S. Department of Education also found that some states' rate disparities are far greater…

The Education Department's report revealed that in 18 states, the spending rate grew more than three times faster for prisons than it did for education.

Here are a few examples of those disturbing findings:

And there's one reason behind that alarming gap…

Why Uncle Sam Is Quick to Spend on Prisoners

The overall prison population in the U.S. went from 490,000 in 1980 to over 2 million in 2014. This was due primarily to often lengthy mandatory minimum sentence laws. Many of the laws are slowly being repealed or revised – such as those pertaining to non-violent drug offenders.

Up Next: Investing is on the verge of changing forever – and for everyone involved, from JPMorgan on down to individual investors. Here's what you need to know before the shifting starts…