Although it's often known as the "poor man's gold," the price of silver has been following in its richer cousin's footsteps lately.

Despite trading in a narrow range for the last seven weeks, silver prices look closer to breaking that range to the downside.

Of course, the silver price is known for following the gold price's lead. But both overbought conditions and thin trading action known as the summer doldrums are pulling silver and silver stocks lower in the near term.

Naturally, the price of silver is also subject to many of the same macro influences as the price of gold. The global economy, geopolitics, and monetary policy all move the white metal.

But more importantly, for the foreseeable future, these factors – coupled with supply and demand – are bullish for silver's outlook.

Let's see why the price of silver fell last week. Then we can determine where the price is headed during the rest of 2016…

Why the Price of Silver Dropped 2.3% Last Week

After surging to $19.99 late Monday night, the silver price fell from those levels early Tuesday morning. It traded in a narrow range the rest of the day and closed 0.2% lower at $19.71.

Oddly enough, the U.S. dollar declined alongside the silver price most of last week. Here's how the dollar trended… 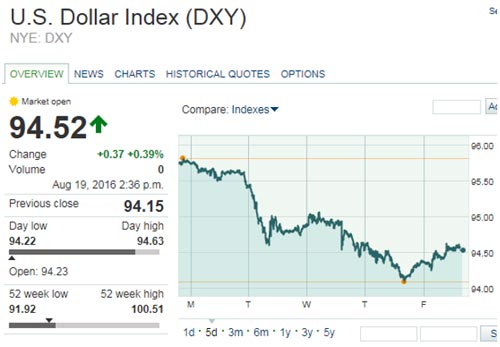 Since silver prices and the dollar often move in opposite directions, the price decline can be attributed to the stock market rally. Both the Dow Jones Industrial Average and S&P 500 traded at all-time highs last week. That usually leads investors to sell safe-haven assets like silver.

The weakness continued on Thursday. Although it traded flat throughout the session, silver fell to $19.70 for a slight 0.05% drop.

Editor's Note: Gold is one of the best assets to have in your portfolio. After all, it's climbed more than 20% this year. That's why we've shared three must-know strategies for gold investing…

Despite their sharp losses recently, I see silver prices heading higher by the end of the year.

We can better understand where silver is headed this year by looking at its relationship to gold prices.

The following chart helps us clearly see that both metals peaked on Aug. 2… 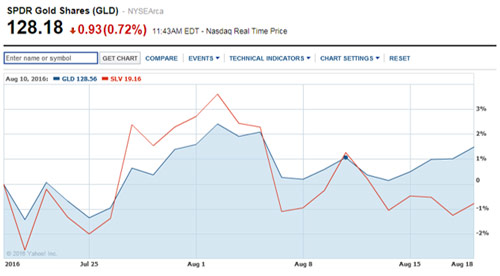 But the drop in the silver price has been much more pronounced. In fact, the gold price even recovered a bit last week, while silver prices declined.

If we compare the action in gold stocks versus silver stocks, there's some interesting behavior to note there as well… 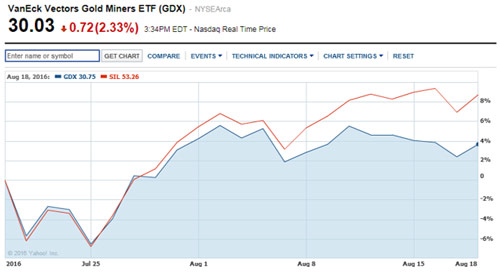 They tracked pretty closely until late July. After that, silver stocks outpaced gold stocks. And even after they corrected, silver stocks bounced back stronger and went on to set new highs for this year.

Silver remains undervalued compared to gold on a historical basis, and that's reflected in the stocks for both metals as well.

In any case, it's worth noting the price of silver is still very cheap compared to the price of gold. While we could see the silver price drop to $18 in the near term, silver still has major gains lying ahead.

Up Next: Profit from "Financial Repression" with This Easy Trade