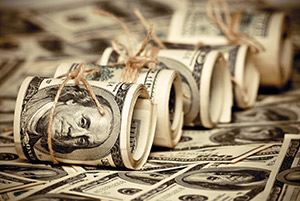 Yellen made the comment Friday at the Fed's symposium in Jackson Hole, Wyo. But she wasn't the only Fed official who spoke. Vice Chair Stanley Fisher suggested the Fed might actually raise rates twice this year. That would mean we'd see a Fed rate hike in September and another in either November or December.

According to CME's FedWatch tool, the odds of a September rate hike are now 30%. Before last week, the odds were just 21%. The likelihood of a Fed rate hike in November is 33%. For December, odds are 44% in favor of a rate increase.

Urgent: This penny stock could soar another 100% - and also save a dying industry. Click here to learn more...

Yellen reiterated that any Federal Reserve interest rate move will be dependent on the data. That's why the August jobs report on Friday will be crucial.

Consensus is for another robust report of about 200,000 nonfarm hires. That kind of gain would bolster the Fed's argument that the U.S. economy can handle a rate hike or two.

Still, the Fed has several good reasons to pause longer on raising rates. Just take a look at some of these numbers:

But the thing is, whether we see another Fed rate hike or not, the Fed has been manipulating markets in a dangerous way. And it's only a matter of time before this wreaks havoc on retail investors like you and me.

Whether We See a Fed Rate Hike or Not, Protect Your Money Now

With interest rates near zero, there is no incentive to save money. But investors still want high-yield investments. So, they have piled into riskier assets. That means investors who typically would not buy stocks have been pouring money into the markets.

Gilani said this makes it appear that everyone is making money in stocks, when really the stock market is "pumped up by aggressive speculators feeding off the Fed." Just because the market is hitting new highs doesn't mean the market is actually "healthy."

And when markets rise, so do retirement account balances. That makes them look more stable than they really are.

The Fed's ultra-easy monetary policy is not only detrimental for most Americans; it's also bad for institutional investors...

"If the inflated stock market backtracks any time, which a lot of billionaire hedge fund geniuses and institutional investors and yours truly think it will, that so-called 'wealth effect' will evaporate like a drop of water in the Sahara," Gilani continued.

Here Gilani outlines three ways investors can make sure that their savings continue despite the Fed's actions:

Up Next: Profit from the price of gold no matter where it moves. Check out everything you need to know about the precious metal in our new gold investing guide...