A routine systems check gone wrong ended in total loss of both the rocket and its payload: a $200 million Amos-6 satellite built by Israel-based Space Communication Ltd., or SpaceCom, meant to be used in Facebook Inc.'s (Nasdaq: FB) effort to provide Internet service to 14 countries in Africa.

SpaceX's Falcon 9 rocket was to have launched on Sept. 3 – just two days later. Instead, it combusted and cost three major companies millions of dollars.

After the SpaceX rocket explosion, CEO Elon Musk said the blast originated around the upper stage oxygen tank in the rocket, but did not specify details on what, precisely, caused it to detonate. 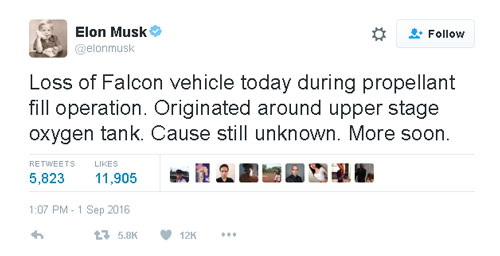 However, no sooner had Musk made his announcement than conspiracy theorists began circulating rumors online that the catastrophe was no accident at all.

You see, the video feed from Cape Canaveral caught what some are labeling an "Unidentified Flying Object" (UFO) soaring past the SpaceX rocket just as it explodes.

Notice the dark object that quickly flies past the rocket at 0:54. This airborne anomaly has spawned suspicion that the explosion may have been caused by a malevolent outside force.

Alien hunters, Martian researchers, and non-believers alike flocked to YouTube to state their opinions of what this flying mysterious object might be.

Several say it was a UFO based on how fast it was moving.

"If between the left tower and right tower there is at least a quarter mile and the so called 'bug' beamed from one end to the other in 1/4 second.

That bug is at least going 3,600 mph minimum. It's not a bird, it's an alien with a laser that destroyed the rocket. You can tell it is not a bird or a bug. Look at how the left tower hides the UFO behind it when you slow it down near the top.

This indicated the UFO is behind the tower and not in front of the camera lens dropping the possibility of a bug."

One YouTuber pointed out that an object moving at such a speed would have created a sonic boom that could have caused the blast.

Meanwhile, The Santa Monica Observer claimed yesterday that while we don't know how the anomaly caused the rocket to blow up, we do know that "the aliens hate Facebook, [as] much as they did MySpace" and are apparently determined to destroy the social network by any means necessary.

Believers in the "aliens hate Facebook" theory suggest that extraterrestrials may have destroyed the SpaceX rocket because they did not want it to launch to space. Proponents of this argument also posit that aliens are anti-social and therefore don't want earth's social networks to thrive (we're not joking). Again, this is all based on the fact that the rocket's payload was stocked with Facebook equipment designed to provide parts of Sub-Saharan Africa with Internet access.

Another theory circulating the net accuses the U.S. government of causing the SpaceX rocket explosion, to its own advantage…

SpaceX Rocket Explosion Conspiracy Theory No. 2: It was a U.S. government drone.

YouTuber Steve Svensson, who also posted a video of the explosion, wrote: "It appears that SpaceX may have been shot by a very fast moving drone, or possibly an explosive in the satellite was triggered?"

Many commenters agreed with Svensson's assessment of the footage – that the flying anomaly was indeed a drone.

But SpaceCom was planning on being acquired by China's Beijing Xinwei Group on the condition that the launch was successful.

Don't Miss: The 5 Most Important IPOs to Watch Now

On the day of the explosion, several YouTubers suggested on Mary Greeley News' footage post that the U.S. government intervened with a drone. Uncle Sam, they claimed, does not want this Chinese acquisition to go through as it would give China more leverage in the quiet technological warfare Washington and Beijing are waging.

SpaceCom indeed suffered post-explosion. Its share price in Tel Aviv dropped 9% last Thursday in the wake of the accident — and more than a third over the weekend.

Meanwhile, Elon Musk, who has struggled recently to merge his two other companies Tesla Motors Inc. (Nasdaq: TSLA) and SolarCity Corp. (Nasdaq: SCTY), is also facing a cash crunch according to an SEC filing by Tesla late last Wednesday.

The filing disclosed that Tesla has to pay $422 million to its bondholders in the third quarter and that it will raise additional money by year's end.

Given the Falcon 9's explosion, coupled with the company's recent cash issues, it is unlikely SpaceX will go public in 2016.

But there's an even bigger reason why SpaceX stock won't hit the market this year.

You see, Elon Musk – the man who made history as owner of the first private company to send a reusable spacecraft into orbit and bring it back to Earth – has outlined definitive plans for the future of his moonshot company. Find out more here…