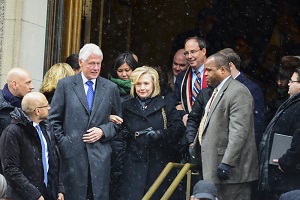 Will Hillary Clinton drop out of the presidential race?

The former secretary of state appeared to collapse during a 9/11 memorial ceremony in New York City on Sunday.

Later in the day, the public learned that Clinton was suffering from pneumonia. In fact, she'd been diagnosed with the serious condition on Friday.

Now on Monday, the press and pundits are weighing the possibility that Clinton may drop out of the 2016 presidential race, though – as of yet – her camp has not made any move indicative that she's even considering the idea…

Will Hillary Clinton Drop Out of the Race?

This morning on NPR's "Morning Edition," journalist and author Cokie Roberts indicated that many of the establishment Democrats are getting antsy over renewed speculation about Hillary Clinton's health.

You see, no Republican or Democratic presidential candidate has ever died or withdrawn before an election in history (nor has a president-elect before taking office).

So an exit for Clinton would be uncharted political territory.

According to the rules of the Democratic Party, the national committee would be responsible for filling Clinton's position. Party officials would each cast one vote at a special meeting and the winner would be whoever got the majority.

If Hillary Clinton Drops Out, Who Will Replace Her?

Currently, there are three replacements the Democratic Party would turn to in Clinton's absence, reported The Telegraph this morning.

While mainstream media sites are speculating which of these three would be most appropriate, it should be noted again that Clinton's campaign has made no motion to suggest she might exit the race.

After doing so, Dr. Bardack told the press, "I have just examined her and she is now rehydrated and recovering nicely," reported CNN this morning.

Next Up: The Donald Trump campaign shares some shocking similarities with two former campaigns, both from the turbulent 1960s: those of eventual President Richard Nixon – the "law-and-order" candidate – and third-party segregationist candidate George Wallace. These similarities speak to an insidious feeling of unrest in our country today…

Were Hilary to drop out of the presidential race after early balloting has started, what will happen to the ballots cast for her?