The markets may be near all time-highs, but there are actually some very troubling stock market crash indicators that we've found.

And these stock market crash indicators are becoming harder and harder to ignore. 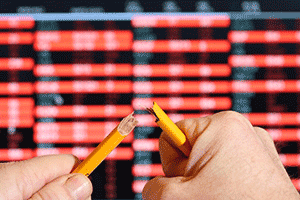 When people hear the words "stock market crash," most think of the Great Depression. The stock market crash of 1929 wasn't our biggest crash, but it was the most prolonged and most devastating drop in U.S. history.

Before the drop in 1929, the Dow had gained 20% in value in just four months. Ordinary families were borrowing money just to invest in the stock market, which was being driven by manufacturing and railroad speculation.

While not quite as extreme, the stock market crash of 2008 was also devastating. The losses on Sept. 29 account for the largest single-day points loss in U.S. history.

This crash was due to speculation again, but this time in the real estate and mortgage sector. It took less than a year for the market to regain pre-crash levels, but the Great Recession lasted for several years.

Before a stock market crash, or even a correction, you might hear analysts speak about "bubbles." A bubble occurs when prices for stocks, homes, or other goods are driven up beyond their true value. There is little doubt that this is what happened with the stock market crash of 2008. We also had a quite a crash in 1987 that was due to overinflated mergers and IPOs.

The Q ratio represents the price of the entire stock market over what it would cost to replace every company from scratch. By historic standards, when the number goes north of 40, we may have a problem. Currently, it's at 52. Also, the price/earnings (P/E) ratio of the S&P 500 is currently about 60% higher than the historic average, another indicator of an overvalued market.

What do overvalued stocks bring us? Generally, major peaks in the market. In August, this is precisely what we experienced with all-time highs for the Dow, S&P 500, and the Nasdaq Composite all hitting on the same day.

We've had a seven-year run on the current bull market. Since this peak in August, the markets have backed off a bit, but all three are still within 1% to 3% of their all-time highs. If we don't see a stock market crash of 2016, be at least prepared for a major correction in the near future.

Both low and negative interest rates are major stock market crash indicators. Once again the Federal Open Market Committee (FOMC) failed to raise interest rates in September, leaving them at their historically low level of 0.25%.

This isn't just a U.S. issue, but a problem worldwide. There are government bonds in Europe that currently have returns below 0%. Would you invest in these? Most investors, including other governments, won't touch them.

When interest rates are low or negative like they are right now, it drives investors to other investment products. And they're mostly flocking to the stock markets, which is part of the reason they've now become overvalued. Many of these stock market crash indicators are directly related...

Speaking of global economies, there aren't many that can boast prosperity at the present time. In fact, U.S. GDP growth was just 1.4% in Q2 2016, and wage growth is down year over year. That's just here at home.

Growth around the globe is lagging. Estimates for global economic growth in the coming year are being revised downward as we speak. The World Trade Organization forecasts global trade growth will drop to 1.7% this year, from a previous level of 2.8%.

Remember when we talked about stocks being overvalued? Despite the fact that the markets are showing us results at all-time highs, that doesn't mean that the underlying stocks and companies deserve those values. In fact, evidence clearly suggests that they don't.

Corporate earnings have been falling as the markets have been rising. The earnings of S&P 500 corporations dropped more than 3% in the second quarter of 2016, according to FactSet, making it the fifth straight quarter of declining earnings.

Plus, commercial bankruptcy filings were up more than 33% in June, which is another ominous sign of trouble in the stock market.

While the number of stock market crash indicators is mounting, there is no need to panic. In fact, we have listed a number investments to make to protect your portfolio when the markets start tumbling...

Investing If There Might Be a Stock Market Crash

Who's going to get rich?