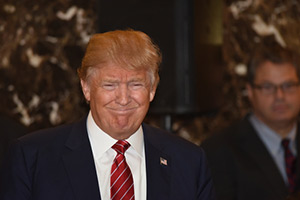 This morning, the Dow Jones Industrial Average was sliding in pre-market hours after Donald Trump won the presidential election. Trump will become the 45th President of the United States in January, news that caused a sharp downturn in the futures markets during last night's election. After Trump's victory, gold prices have surged above $1,300 per ounce, while the Mexican peso hit a record low against the U.S. dollar.

On Tuesday, the Dow gained 72 points as investors placed their bets on Hillary Clinton winning the U.S. election. The markets have since pared those gains and after the surprise election results.

The Dow Jones Industrial Average projected an over 200-point plunge after GOP nominee Donald Trump stunned Wall Street to pull off a victory in the 2016 election. According to FiveThirtyEight, Clinton had a 71.4% chance of winning last night. But Trump overcame the odds and won the key states of Pennsylvania, Michigan, and Ohio.

At one point during the final hours last night, futures fell nearly 800 points, a downturn that was similar to June's referendum in which Britain voted to leave the European Union. However, the markets appear to be paring Monday's gains as investors contemplate the economic implications of a Trump presidency.

Based on the races that have been called so far, Trump has earned 289 electoral votes compared to Hillary Clinton's 218. Three states - Minnesota, Michigan, and New Hampshire - are still too close to call. Clinton appears to have won the national vote. So, how should you invest this morning? Money Morning Global Credit Strategist Michael Lewitt offers you a way to make money during the day after.

This morning's winners include Boeing Co. (NYSE: BA), which was gaining in pre-market hours.

The price of crude oil today pared losses after the conclusion of the U.S. election. Investors were also eyeing the progress of OPEC's production deal and the nuclear deal between Iran and the United States. This morning, Iranian officials said that President-elect Trump should remain committed to the nuclear deal.

Dr. Kent Moors, Money Morning's Global Energy Strategist, notes that the oil market is currently seeing a high level of volatility because of the election. Here's his latest insight on crude prices and today's big election.