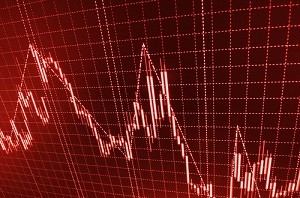 This morning, the Dow Jones Industrial Average is flat after hitting an all-time closing high on Tuesday.

Later today, investors will parse through the minutes of the Fed Open Market Committee's latest meeting. The markets largely anticipate that the Federal Reserve will raise interest rates in December.

On Tuesday, the Dow gained another 67 points. The index surpassed the 19,000 level for the first time in its history. Financial stocks and telecom stocks boosted the Dow. But the healthcare sector had its largest decline - 1.5% -- in a month.

The Dow Jones Industrial Average was flat in pre-market hours. With interest rates in focus, this morning revealed a surprise surge in mortgage applications. The nearly half-percentage-point rise in the 30-year mortgage rate has potential homebuyers moving to lock in rates on fears they will continue to increase.

The price of oil slipped this morning as traders show reduced optimism on the ability of a production deal by OPEC to limit a global glut in crude. The WTI crude oil price today fell 0.3%, while the Brent crude oil price dipped 0.1%.

The global oil cartel is set to announce potential cuts of 4.0% to 4.5% of its output. But some analysts are concerned given the hesitation by producing nations like Iran and Iraq. Money Morning Global Energy Specialist Dr. Kent Moors has been traveling to the Middle East and says that there are two other factors that could hold up the deal. Check out his latest column that explains why this deal is in doubt and what it means for energy investors.

Gold prices have taken a beating in recent weeks. Hopes for a return of robust U.S. growth, less banking regulation, corporate tax cuts, and hefty infrastructure spending have driven investors to riskier assets like stocks and away from safe-haven gold. The combination of a stronger U.S. dollar and increased expectations for a rate hike have created a buying opportunity for investors. [Editor's Note: Here's our latest gold price forecast and why we see prices heading back toward $1,300 per ounce.]

But the big news today is happening at Facebook Inc. (Nasdaq: FB). The social media giant has made a number of huge concessions to the Chinese government in order to get back into the world's second-largest economy. The firm had been banned in China for seven years.

CNBC reports that the firm has quietly created software that will suppress posts from certain citizens' newsfeeds in certain geographic locations around China. Anti-censorship activists are crying foul, but the company said that it is not actively blocking content. This isn't the first country where Facebook has limited posts. In the past, Facebook has limited content in Pakistan, Russia, and Turkey.