Two weeks after the election on Nov. 8, markets continue to rally in support of a Trump victory.

While most investors focus on the "big guys" in infrastructure, healthcare, and financials, it's vital not to overlook the "little guys" in the markets - especially small, domestic companies who predominantly trade in U.S. currency. Smaller companies have more room to grow and are highly affected by the expansion of the economy, because the majority (or all) of their business dealings are in America.

The Russell 2000, an index that tracks small-caps stock, has extended its winning streak to 13 sessions - its longest since February 1996. 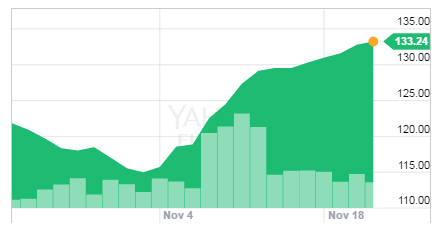 And small-cap stocks have nowhere to go but up with a Trump presidency. His policies regarding trade wars, fiscal stimuli, and corporate tax reforms will have the most impact on smaller companies because they are closely tied to the U.S. economy.

We expect domestic companies will thrive under a President Trump, who ran a campaign highlighting the need to put America first:

"A simple core principle, putting America first, would be at the center of each agenda item," Trump stated in a recent informational video on Nov. 21.

"I want the next generation of innovation and production to be right here, in the homeland," he said.

Trump's focus on America means high spending and production. As a result, domestic companies are ultimately going to benefit, and benefit "bigly."

The California-based contracting giant is responsible for funding many infrastructure projects, including "Big Bertha," a huge tunnel-boring project in Seattle, Wash. This tunnel will be 9,270 feet long and 115 feet deep - allowing for a major highway to be carried under downtown Seattle.

Small-cap, domestic companies like Perini have seen their stocks rally in the weeks following the election because investors are excited and confident about increased infrastructure spending in the United States. Within the past month, TPC shares have risen over 35% -- and they keep climbing.

Trending News: How Small Investors Can Take on Wall Street... and Win

Trump has also proposed renegotiating how trade is conducted in America -- a move that should positively impact small-cap stocks.

"A notification of intent to withdraw [from the TPP]" along with "negotiations on fair, bilateral trade deals" will be first up on Trump's agenda.

Larger companies are concerned about the impact of this decision. However, U.S. revenue-based companies will not be affected by a trade war, which some investors are expecting to see under the Trump administration if he withdraws the United States from the partnership.

There's an even greater reason why investors are betting big on small caps...