When it comes to mining – of both precious and strategic metals – most of the "low-hanging fruit" has been both discovered and mined out.

That's even with the sophisticated power, equipment, and transportation technologies we discuss every week here.

And that leaves us with much lower grade deposits… at least on land.

One of the biggest tech advancements in recent years, however, has made those lower-grade deposits – i.e., lower metal concentration per ton of rock – economic to mine. I'm talking about the ability to move, crush, and process massive amounts of rock from open-pit deposits.

Because so many of those metals are critical for high-tech weapons systems and all the "smart" devices we all now depend on, that's one Singularity Era technology changing "How We Survive."

However, as we all learned in school, oceans cover 71% of Earth's surface.

And most of that is very, very deep.

But we're closer than you might think to mining for metals – many of them absolutely necessary for the tech devices that are fueling the Singularity Era – from the ocean floor.

Let me show you what that will look like (illustration below)…

Nautilus Minerals Inc. is the first company to commercially explore the ocean floor. That's where massive sulfide systems exist, which can be sources of high-grade gold, silver, copper, and zinc.

Right now, the Toronto-based company is developing a system adapted from the offshore oil and gas and dredging industries. It is building a custom system to extract high-grade seafloor massive sulfide (SMS) systems at a commercial level. 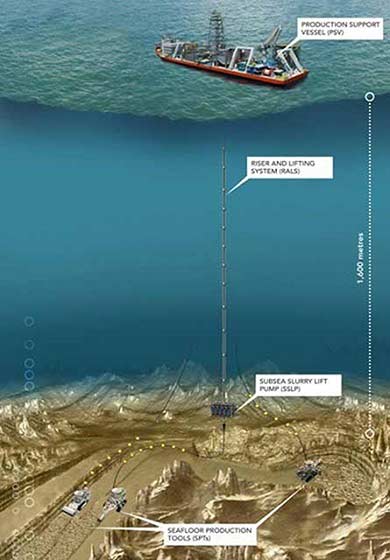 Essentially, robots on the seafloor grind away at mounds that contain high concentrations of valuable metals. A resulting slurry of material gets pumped up to a ship above, where it is dewatered. The solid material is then stored until it's later transported away for refining.

Nautilus already has a copper and gold project under development in the territorial waters of Papua New Guinea and plans on growing its holdings in the South Pacific.

Right now, Nautilus is still developing and testing this equipment.

But before too long, it could be the first company to be officially mining the ocean floor. If Nautilus is successful and profitable, that could open up vast new areas of the world that have yet to be explored.

This is exciting stuff.

But it's not the only Singularity Era technology metal miners are using.

After all, there are still plenty of precious and strategic metals under our feet – in those lower-grade deposits.

If we can get to them…

And it's likely to be as disruptive to mining as fracking has been to oil and gas production. 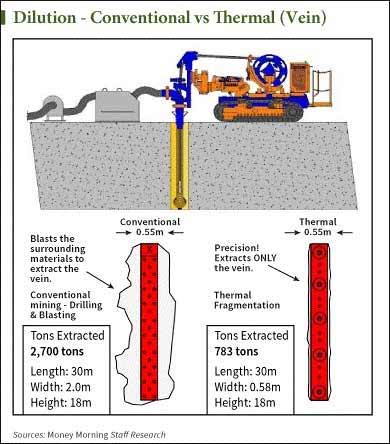 A pilot hole is drilled into metal-bearing rock, and then a thermal head is inserted and ignited. It generates heat while injecting air into the hole. The heat cushion generated causes the rock walls to "spall" and fall away in very small fragments.

This procedure – called "thermal fracking" – keeps expanding the size of the hole until the desired dimension is reached. It can generate a 1.2-square-meter hole in under 10 minutes.

The resulting fragments contain the valuable metal, like lithium and the other rare-earth metals we need for miniaturized electronics, advanced batteries, weapons systems, and solar panels. Because narrow veins can be targeted with surgeon-like precision, some 80% less ore needs to be removed.

There is little or no blasting involved, avoiding the wall damage typical of standard extraction techniques, while improving safety and lessening costs.

A fraction of the time is required, and the mined ore needs significantly less processing. So less transportation, fuel, water, electricity, and equipment are required.

Overall, production costs are reduced by 30% to 60%, and valuable metals that have been left underground in existing mines for structural reasons (in pillars) can safely be extracted.

As you can see, these two very different mining companies are both on the cusp of starting Singularity Era revolutions, each with its own technology.

Now, I spoke of lithium briefly as a metal necessary for batteries and other technologies. But tech companies also need precious metals like silver and gold.

Gold has long been central to electronics. Its unique properties, combined with "nanotechnology," are leading to innovations in medicine, engineering, and environmental management.

For example, biopharma companies are using gold to build highly targeted methods for delivering drugs. Chemists are using it to create conducting plastics and specialized pigments. And engineers are using the yellow metal to develop advanced catalysts that purify water and air.

But advances such as those aren't the only thing occurring in gold right now. 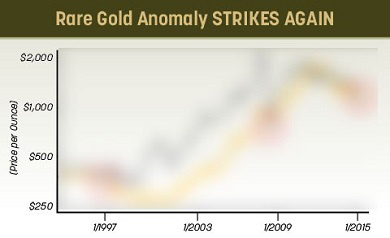 I'm talking about a strange anomaly that we've seen only twice in the past 20 years.

Both times this "anomaly" produced massive cash windfalls for those who knew where to put their money.

Yet because of all the news about Donald Trump and the elections… practically nobody is talking about it. It's completely off the radar.

That's why I wanted to bring this gold anomaly to your attention today. It's like Halley's Comet – very rare and fleeting.

But, right now, everything is lining up perfectly.

That means, if you hurry, one easy move could bring you some very sizable profits.