Should I sell my Bitcoin now that the price has doubled in just one year?

A lot of Bitcoin owners no doubt have been asking themselves that question of late, given the rapid rise in the Bitcoin price since early December. 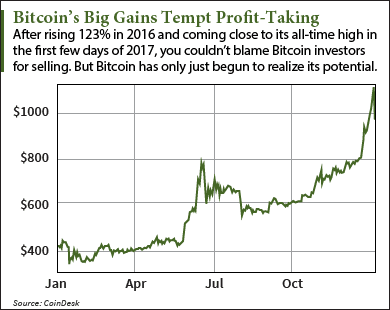 Returns like that typically have investors thinking it may be time for some profit-taking. After all, how often does an investment double in one year?

Those who bought at much lower prices - the digital currency traded below $300 through most of 2015 and below $500 through the first five months of 2016 - may also be tempted to sell their Bitcoin now.

Related: How to Buy Bitcoins - The Money Morning Guide

And anyone remotely familiar with Bitcoin remembers what happened the last time Bitcoin traded over $1,000, in the fall of 2013. The Bitcoin bubble burst, causing huge losses for those that bought at the top as the price skidded to below $200 over the next year.

Fears that will happen again make a compelling case that it's time to sell Bitcoin.

But another major collapse isn't likely...

Much has changed in the past three years. The 2013 episode was brought about by a combination of media hype, wild speculation, a lack of oversight, and thinly traded markets.

For one thing, most Bitcoin trading back then was done on the troubled Mt. Gox exchange, which imploded in early 2014. Today's Bitcoin exchanges are much better run. The Winklevoss twins' Gemini exchange, for example, is fully compliant with government regulations.

Is There a Bitcoin ETF I Can Buy?

On the Chinese Bitcoin exchanges, where most Bitcoin is traded, the volume is 37 times higher now than it was then, creating a more stable market better able to determine prices.

Finally, Bitcoin has become more mainstream. In 2013 the digital currency was still dominated by technophiles, libertarians, and those who used the anonymous transactions in criminal pursuits. Since then a much larger and more diverse array of users have joined the Bitcoin community, including venture capitalists, the big banks, and rank-and-file citizens from around the world.

Trending: The Global War on Cash Is Here - This Is How to Fight Back

In addition, it's worth noting that since bottoming in early 2015, the Bitcoin price trend has moved higher. Although there have been pullbacks after other spikes, each time the price of Bitcoin has consolidated at a significantly higher level. 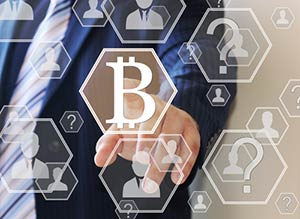 For example, in late May-early June, the Bitcoin price jumped from $450 to more than $750. In the weeks that followed, the price of Bitcoin remained volatile but never fell below $550. Eventually it consolidated around $600.

The current sharp pullback is most likely the beginning of a similar process, with the Bitcoin price consolidating at a significantly higher level than where this rally started.

Still, the impulse to sell Bitcoin is strong when you've doubled or tripled your money.

Here's why investors should consider hanging onto Bitcoin despite their big gains...

Why Selling Bitcoin Now Could Be a Mistake

Where can I buy bitcoins in Canada ? Is it sold in any bank yet?

Thanks for reading Money Morning. Banks aren't selling Bitcoin in Canada (or anywhere that I know of). That may change someday but for now investors need to buy their Bitcoin elsewhere. Today there are more than 20 options for Canadians to buy Bitcoin.

You don't mention the other crypto currency Eutheria, or Ether, which I've heard is a better product than bitcoin and has been tested extensively. What;s the story on that?

Thanks for reading Money Morning. At this point, there are hundreds of cryptocurrencies. Bitcoin is still by far the largest by market cap. Some of the other cryptos I believe will emerge as niche solutions as time goes on. Ethereum is one of the more promising ones. See my response to James below. :-)

Any thoughts on Etherium? Bitcoin had a huge jump based on Chinese instability, but Etherium seems to have better ease of use as a blockchain. Not sure if it will be successful as a cryptocurrency, would enjoy your thoughts.

Thanks for reading Money Morning. I wrote about Ethereum last spring. It does have some advantages over Bitcoin, but I see the two co-existing. Ethereum has had its growing pains, though.