"Why is the Bitcoin price rising past $1,000?" is a question on a lot of lips this week. And for good reason. 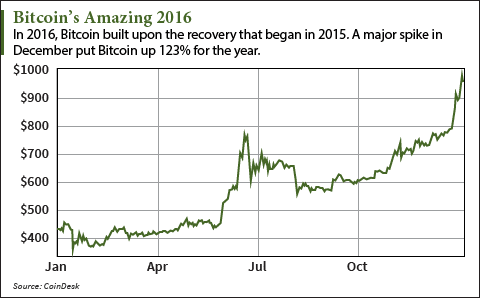 That's the highest level for the price of Bitcoin since December 2013, when the digital currency had started its year-long retreat from its all-time high of $1,156.06.

It's the second year in a row the digital currency has topped all other assets. In 2015 the price of Bitcoin rose 35%.

Trending: How Small Investors Can Take on Wall Street... And Win

Even so, the recent surge in the Bitcoin price - particularly December's steep rise - took many by surprise. It's left many searching for an answer about what's driving such aggressive price increases.

Of course, part of the answer is that there isn't just one answer...

Why the Bitcoin Price Has Been Rising So Fast

Multiple factors combined in the second half of 2016 to set Bitcoin up for its current run to $1,000. Such as:

Now with all that as a backdrop, add one more incredibly potent ingredient: China.

How China Has Fueled the Rise in the Price of Bitcoin

In general the rise in the price of Bitcoin in 2016 has mirrored the decline in the value of the Chinese yuan.

China's influence over what happens with Bitcoin has grown dramatically over the past several years. Most of the Bitcoin miners are located there. And more than 90% of Bitcoin trading by volume takes place on the Chinese Bitcoin exchanges, although those numbers are thought to be inflated.

One the reasons Bitcoin has grown popular in China is that it offers a haven from the falling yuan. Chinese businessmen and middle-class citizens see Bitcoin as one of the few options they have to preserve their wealth.

Some Chinese are also likely using Bitcoin to skirt that nation's capital controls. And that monthly rate at which capital is leaving China continues to accelerate. In August, about $27.7 billion worth of yuan left China. In September, that number rose to $44.7 billion. In November it was $69.2 billion.

The Chinese are concerned about further yuan devaluations as well as increased tightening of capital controls.

Just last Friday the People's Bank of China (PBOC) announced that the threshold for Chinese banks to report yuan-denominated cash transactions will drop from 200,000 yuan to just 50,000 yuan (about $7,200).

This is why the Bitcoin price in yuan has been tracking higher than its price in U.S. dollars lately. Today (Monday) Bitcoin has been trading at about 7,320 yuan - the equivalent of $1,053.

Fears of what the PBOC will do next will keep worried Chinese buying Bitcoin, which in turn will maintain upward pressure on the price of Bitcoin, at least in the short term.

But what does 2017 hold in store for Bitcoin? Here's what some top Bitcoin influencers recently told Money Morning...

Where the Bitcoin Price Is Headed in 2017